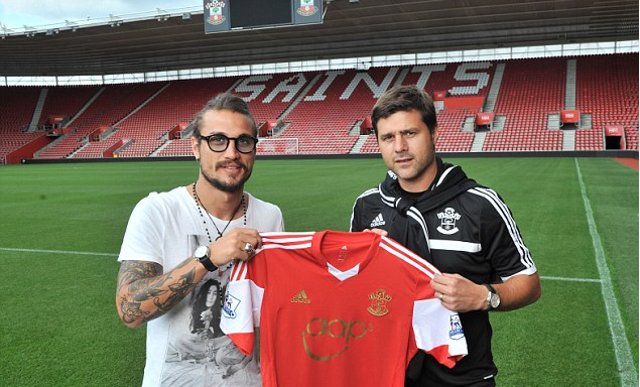 New Southampton striker Pablo Osvaldo has spoke of his delight at being able to complete a move to the club and be reunited with his former manager Mauricio Pochettino, the Daily Mail reports.

Osvaldo put pen-to-paper on a four year contract at St Mary’s in a deal worth around £15.35 million, smashing the previous club record  set by Victor Wanyama when he signed on from Celtic earlier in the summer.

He highlighted the opportunity to work with Pochettino again as one of the key factors in his decision to swap ancient Rome for the English riviera having played under him at Espanyol and described him as a “great motivator” and someone who “appreciates and respects how I work.”

“It’s the club that showed the most interest in me. Second of all I know Mauricio and I know how he works. I’m very happy to be working with him,” he said.

“And also because I wanted to play in the Premier League, I’ve been dreaming about it and I want to do something important in the league.”

“He’s magnificent. It’s fantastic, great to work with him,’ he said. ‘He is a great motivator and for me it’s very important to work with people who appreciate and respect how I work. For many years people haven’t appreciated that.

“I know him well and how he sets out his teams. The season I had at Espanyol was my best as a footballer. In a personal sense, I think I did well playing under him.

“I want to repeat that and improve it. I’m confident that will happen and I can’t wait to start.”

Osvaldo also said that it wasn’t difficult to leave a side expected to push for Champions League football this season for a side largely tipped to finish in mid table explaining; “No it wasn’t difficult at all. in fact from the moment I signed I was relieved. It’s what I really wanted for me and my career and my girlfriend. We’ve been looking for houses for three months, it wasn’t a difficult decision.

“Like I said before, I always wanted to play in the Premier League. I’ve always been a massive fan, even before I was in Italy. It was always a dream.

“For someone who comes from Argentina and plays for Italy, one thing that strikes me is the respect for the players from the fans.

“They respect that you’re trying even if you make mistakes. Overall, the technical level of the league is amazing, it’s dynamic.

“It’s not boring on TV which can happen in other leagues.”