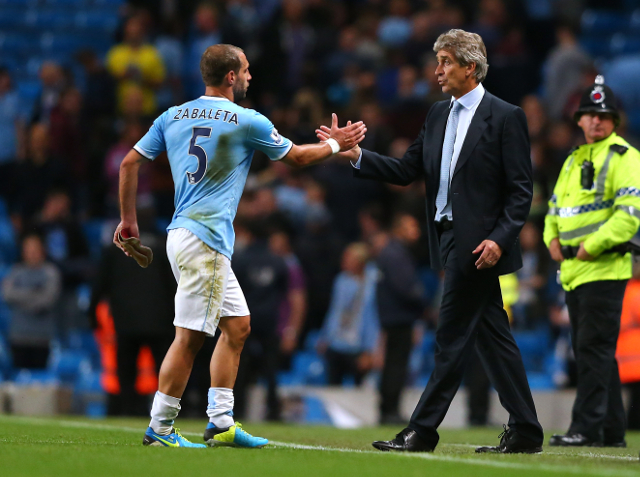 Manchester City full back Pablo Zabaleta believes the club will win the title back this season, and furthermore, they’ll do it in style, the Mirror reports.

City got their first glimpse of life in the Premier League under new boss Manuel Pellegrini when they beat Newcastle United 4-0 in their opening day encounter.

Zabaleta believes that the standard has now been set by the Chilean boss and fans can now expect a fast paced, high intensity brand of football that he thinks will win them the league title back with style.

“The battle for the title is going to be interesting,” said the Argentine right-back, who has signed a new four-year deal with City.

“We want that title back and we will try to get it back this season with attractive football.

“Our performance against Newcastle was fantastic. The team spirit was great and this is the way we want to play.

“If you saw Pellegrini’s teams before he came to City, they always played this way. They were very aggressive, always trying to kill the ball, get into spaces and, above all, playing to win.

“He produces aggressive, attacking teams who play with a good tempo and a high intensity. We did that against Newcastle.

“We have been working really well in pre-season. His communication with the players has been good and he has made his ideas very clear.

“We know the way we want to play. It’s obviously only the first game of the season, but we scored goals, kept a clean sheet and now we move on to Cardiff.”