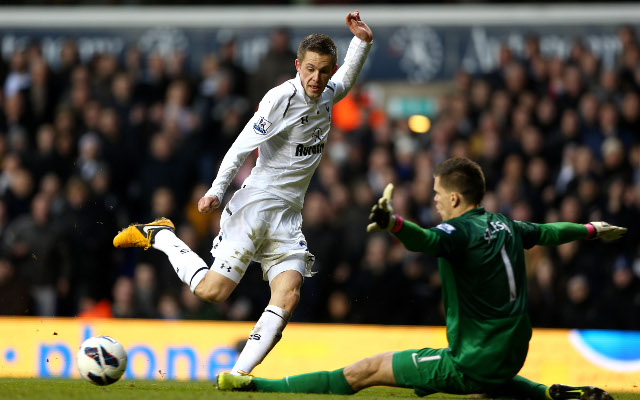 Tottenham Hotspur midfielder Gylfi Sigurdsson has said that he is not looking to leave the club this summer and hopes to continue his fine form from the second half of last season into the current campaign, Sky Sports reports.

The 23-year old joined from Bundesliga side Hoffenheim last summer after impressing whilst on loan at Swansea, but he endured a difficult start to life at White Hart Lane, failing to net a Premier League goal until February.

But he eventually ended the campaign with seven goals across all competitions and has admitted that he is eager not to replicate the disappointing form he displayed in the early part of the season.

“Obviously it took me a while to settle in and get off the mark,” he said.

“Did the fans see the best of me last season? Probably towards the end. I wasn’t happy with myself at the beginning until Christmas.

“I think my first goal in the league came at West Ham – a scrappy one but they all count. Then after that things started falling for me and I got a couple of goals.

“Sometimes you just fit in straight away – that’s what happened at Swansea – but it’s taken a bit of a longer time that I wanted here at Tottenham and hopefully I can do well this season.”

Sigurdsson started behind the strikers in the side’s 1-0 victory over Crystal Palace, which he believes to be his strongest position.

“It was nice to play there again, I enjoy playing there,” he said.

“Hopefully I’ll stay there behind the striker because (Roberto) Soldado and Jermain (Defoe) are top strikers and it’s quite easy and good to play behind them.

“As long as I’m playing I don’t really mind, but that’s one of my better positions – playing behind the striker. I think that’s probably what I prefer but if the gaffer wants me to play on the left or right side then I’m quite happy to play there.

“We’ve brought in a few good players. Hopefully there’ll be one or two more to strengthen our squad because it’s a long season, we’ve got many competitions, and we need a lot of good players.”