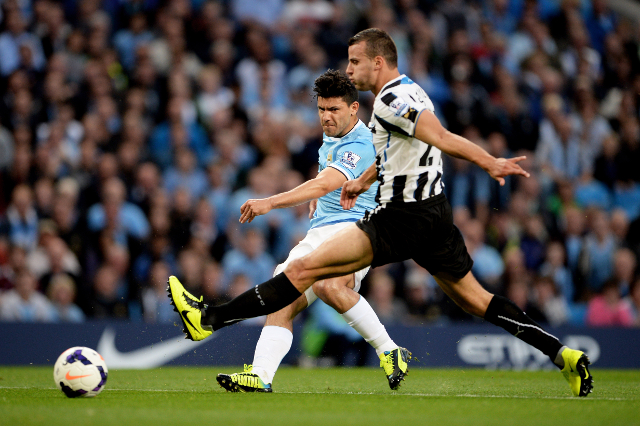 Argentine ace hopes for more score-lines like the result against Newcastle.

Manchester City striker Sergio Aguero has said that he and his teammates are targeting more score-lines like their opening day 4-0 demolition of Newcastle United, the Daily Mail reports.

Agureo netted the second of City’s four goals on Monday night after David Silva had given them the lead. Yaya Toure and Samir Nasri also got on the scoresheet as the Magpies misery was compounded by Steven Taylor’s sending off late on.

And the Argentinian international has said that Manuel Pellegini’s men will be taking no mercy as they look for more impressive results as the season goes on, arming them with an impressive goal tally for the end of the season.

“I’m very happy because we won but most important was the three points,” said Aguero.

“It’s important to score goals because they all count at the end of the season.

“It was important when we won the league title so it’s important to score as many as we can.”

Aguero wasn’t expected to start against the Toon Army, having not featured during the side’s pre season campaign, but he revealed that he has been raring to go and cannot wait until the side find their groove as the season progresses.

“Last week I trained on my own, but this week I trained with my team-mates. The manager asked if I was feeling fine, and I said “Yes,” and it went well.”