United legend could head back to Old Trafford with Spurs star set to replace him at Bernabeu.

Real Madrid star Cristiano Ronaldo could be set to make a sensational return to his old club Manchester United, after it emerged that he has become unsettled by Gareth Bale’s arrival at the Bernabeu.

With Bale’s £94million world record move from Tottenham all but confirmed, inevitable question marks will be raised over Ronaldo’s role in the team, as the Welshman is arguably competing for the same position in Carlo Ancelotti’s starting eleven.

The summer-long saga surrounding Bale has coincided with Ronaldo’s future at the club coming under further scrutiny, with United linked on a few occasions with attempting to bring him back to the club, whilst big-spending French giants PSG and Monaco have also shown a strong interest in the 28-year-old.

Despite scoring a phenomenal 201 goals in 200 appearances for the Spanish giants, Ronaldo has stalled on signing a new contract with the club, and it has been hinted that he is unhappy with how publicly Real have pursued Bale this summer, as well as his move breaking the world record for highest transfer fee, which Ronaldo set in 2009 when he left United for £80million.

Ronaldo would still no doubt be an expensive purchase, and it seems that a bid of £77million might be enough for United to land the Portuguese international, in what would represent a dream signing for new manager David Moyes in his first summer at the club. 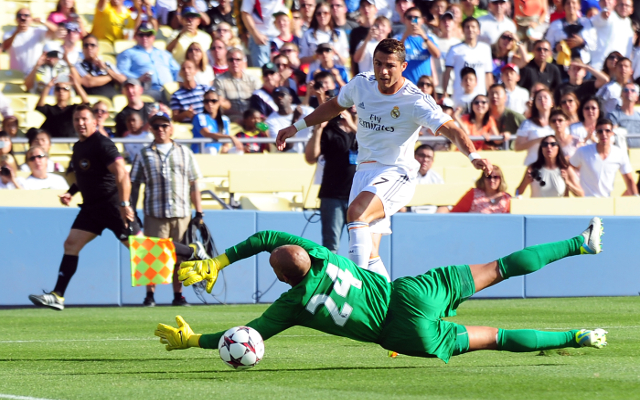 Since replacing the legendary Sir Alex Ferguson, who retired in May after 25 years in charge at Old Trafford, Moyes has struggled to bring in his prime targets during this transfer window, failing in several attempts to sign a new creative midfield player to replace Paul Scholes, who also retired at the end of last season.

After missing out on Thiago Alcantara and Cesc Fabregas, Moyes is now looking to raid his old club for Marouane Fellaini in an attempt to improve his midfield options, but he has also been linked with forward players such as Samuel Eto’o, as Wayne Rooney’s future at the club remains uncertain due to strong interest from rivals Chelsea.

It has been reported that United would let Rooney leave if they could bring in a replacement, and Ronaldo may now be the ideal candidate to form a potentially lethal strike partnership with Robin van Persie upfront.

Ronaldo scored 118 goals in his first spell with United, winning three Premier League titles and the Champions League. While he has shone individually in Spain, his trophy haul with Real Madrid has been somewhat less successful, with just one La Liga title and one Copa del Rey trophy to his name.