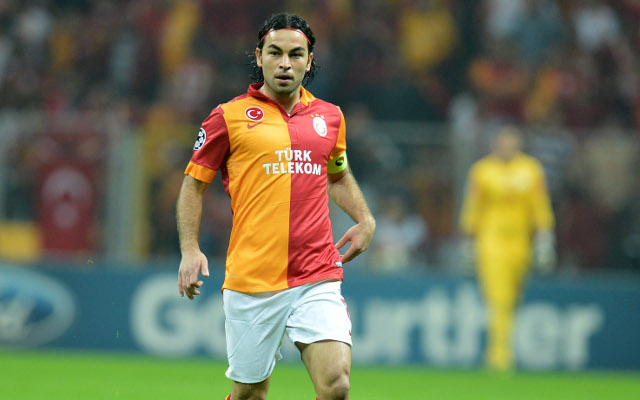 Liverpool are eyeing up a move for Galatasaray star Selcuk Inan in a bid to add more creativity to their midfield, CaughtOffside understands.

The 28-year-old has been labelled the ‘Turkish Xavi’, and is widely considered to be one of the most naturally talented midfield players to ever play for Galatasaray, helping them to two Turkish league titles since joining the club from Trazbonspor in 2011. The player himself has also described Real Madrid and France legend Zinedine Zidane as his role model.

Reds manager Brendan Rodgers has been hoping to sign a midfielder all summer, as he still feels the club could do with a true playmaker in their side, following the unsuccessful signings of Nuri Sahin and Joe Allen last season.

Sahin, brought in on loan from Real Madrid, left the club just half way through the season after failing to make an impression in the Premier League, whilst Allen, a £15million signing from Rodgers’ former club Swansea, also failed to reproduce the form that saw him stand out as a key player for the Welsh side.

Rodgers has been linked with moves for some high-profile attacking midfielders this summer, and failed to bring in top target Henrikh Mkhitaryan, the skillful Armenian who left Ukranian side Shakhtar Donetsk for a move to Borussia Dortmund. Liverpool have also been chasing Ajax starlet Christian Eriksen, and though the Dane’s future remains unresolved, it has been suggested that he would have preference for a club that can offer him Champions League football, and Italian champions Juventus are now the favourites to sign him.

It now seems that Inan could be the solution to Liverpool’s problems, and that the Turkish international would be keen to test himself in the Premier League. With 20 goals and 29 assists in the last two seasons for Galatasaray and a reputation as a free-kick specialist, he could also be compared with former Liverpool star Xabi Alonso, whom the club have arguably failed to replace ever since he left for Real Madrid in 2009.

Alonso himself was also linked with a possible return to Anfield this summer, though he has been keen to continue to fight for his place at the Bernabeu under new manager Carlo Ancelotti.

Inan would fit in nicely alongside other skillful and technically gifted players in this side that Rodgers is building, such as star striker Luis Suarez, exciting youngster Coutinho and summer signing Luis Alberto.

Despite being a key player for Galatasaray, it is thought that he could be available for around £14million, which would represent a real bargain for Liverpool if he can settle in England and reproduce the form that has made him so formidable in the Turkish league.