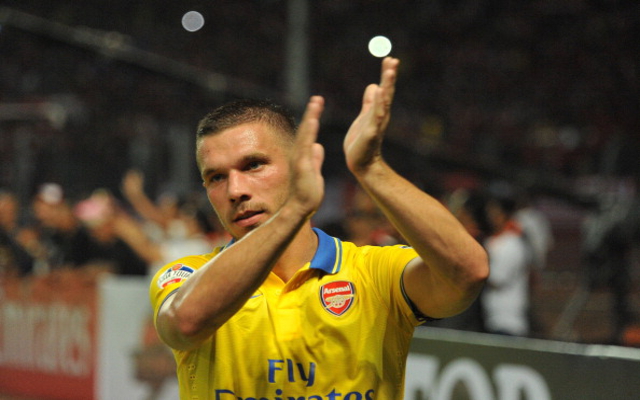 Tottenham could be set for a shock raid on their arch-rivals Arsenal for German forward Lukas Podolski, according to Bild.

The 28-year-old, also rumoured to be wanted by Bundesliga side Schalke, only joined the Gunners last season and enjoyed an impressive first year in the Premier League.

However, having started Arsenal’s first two games of the season on the bench, limited only to brief cameos at the end of both matches, Spurs could make an audacious attempt to lure him to White Hart Lane.

Arsenal are unlikely to want to sell a key player to their rivals, and the club’s fans will be hoping that this surprise move does not complete a miserable summer in the transfer market for the Gunners.

In stark contrast to their neighbours Spurs, who have spent big money on established names, Arsenal have only managed one signing so far, young striker Yaya Sanogo from Auxerre.

Tottenham are now considered favourites to beat Arsenal to a top four place, and Podolski could be another useful addition to the team’s attacking options, joining the likes of Roberto Soldado and Willian in moving to White Hart Lane this summer.

With Gareth Bale leaving for Real Madrid, Podolski’s ability to play upfront or out wide would be particularly useful to Andre Villas-Boas.