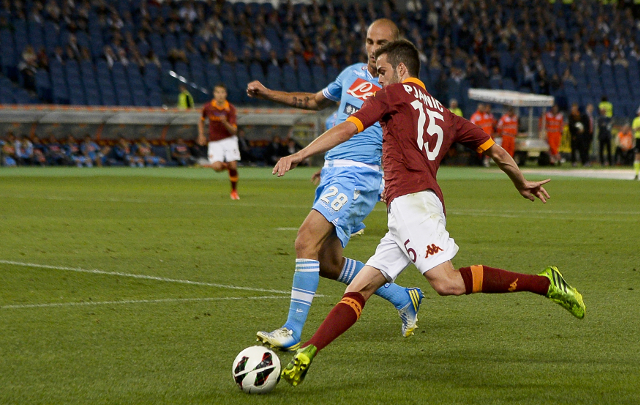 Arsenal have stepped up their interest in AS Roma attacking midfielder Miralem Pjanic, according to Corriere dello Sport.

The Italian side sent over representatives to England this week to discuss the transfer of Miralem Pjanic with Arsenal, and the Gunners are preparing a bid for the Bosnian midfielder, but face a battle with Tottenham for his signature. Arsenal, having spent no money so far this summer, are hoping to get this deal wrapped up quickly so they can progress with other targets.

Roma’s sporting director, Walter Sabatini, has flown to England this week with a number of negotiators to discuss the transfer of three of their players: Pjanic, striker Marco Boriello, and attacker Erik Lamela. Boriello has been linked with a move to Fulham and West Ham this summer, and could be available for a cut-price fee.

Erik Lamela is a reported target for Tottenham and hope to wrap up a £30million for the Argentine attacker this week. Arsenal are also keen on Lamela, but would like to focus their attention on signing Pjanic this summer. The midfielder was close to joining the Gunners two summers ago, but the midfielder opted to join Roma on the word of his father.

It’s believed that the 23-year old midfielder is available for as little as £18-20million this summer. Tottenham are also interested in Pjanic, but having signed a number of midfielders already this summer, including Paulinho and Etienne Capoue, they feel their money would be better spent improving in the attacking third, with Erik Lamela their main target.