Emirates Stadium side could be set to snatch Serie A forward from under White Hart Lane rival’s noses.

Arsenal are reportedly in ‘secret’ talks with Roma striker Erik Lamela as Arsene Wenger looks to lure the Argentine from Tottenham’s grasp.

CaughtOffside understands that the 21 year old has been in advanced negotiations with Tottenham but may now have been tempted to reconsider his options and elect a move to the Emirates Stadium instead of White Hart Lane. Andre Villas-Boas has seen Chelsea conduct a similar last gasp raid to land Brazilian Willian, that after the Brazilian had already passed a medical with Spurs, and the Portuguese boss will not want to see Arsenal pull off a similar feat.

Despite seeing Oliver Giroud and Lukas Podolski scoring goals early into the current campaign Arsene Wenger is urgently seeking the acquisition of a new striker signing and having failed with advances for Gonzalo Higuain, Stevan Jovetic and Luis Suarez the Gunners boss is hoping to win the race to land Lamela, who perhaps better fits the North London club’s playing style.

The speedy cultured forward netted 15 goals in 30 Serie A starts last term and is a player with a great deal of potential and seemingly a player who is keen to secure a move away from the Stadio Olimpico, not least as Roma do not have European football of any sort whatsoever to offer the Argentine international. 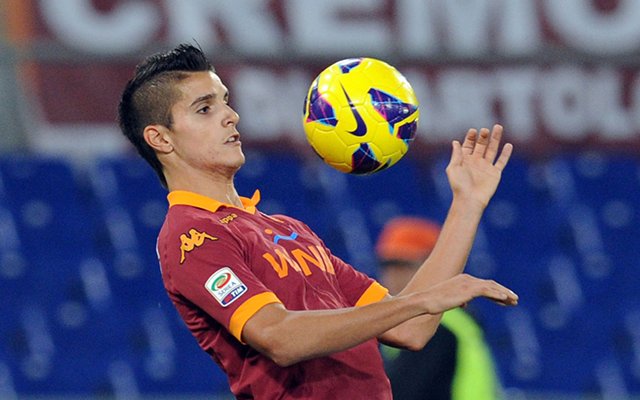 Wenger is yet to spend a single penny in the summer transfer window, the only signing Arsenal have thus far secured being that of Yaya Sanogo on a free transfer from Auxerre. With Champions League football all but secured following an impressive 3-0 away win away at Fenerbahce the Arsenal boss has been urged to make the most of the £70m+ transfer kitty he has been handed.

The possibility of plying his trade in the Champions League may well see Lamela opt for a move to Arsenal over a Tottenham switch and Arsenal are ready to fork out a club record £27m fee for the former River Plate man.

Villas-Boas is keen to supplement his attack but has already managed to spend big this summer with Roberto Soldado, Etienne Capoue, Nacer Chadli and Paulinho all moving to Tottenham this summer, the fees for whom will be more than covered by the probable sale of Gareth Bale to Real Madrid.