Arsenal could be set to make a surprise £18million bid in an attempt to prise Belgian starlet Romelu Lukaku away from rivals Chelsea, CaughtOffside can reveal.

The 20-year-old is one of Chelsea’s most exciting young players, but he looks to be finding regular first-team football hard to come by at Stamford Bridge, with manager Jose Mourinho seemingly not prepared to play him ahead of the likes of misfiring pair Fernando Torres and Demba Ba.

Both Torres and Ba have been linked with moves away from the club this summer after some disappointing form, but have been kept around by Mourinho and are seemingly preferred in the starting lineup due to their age and experience.

Big things were expected of Lukaku when he signed for Chelsea from Anderlecht in 2011, but he has so far only managed to reach top form in a loan spell with West Brom last season, scoring 17 Premier League goals for the Baggies. 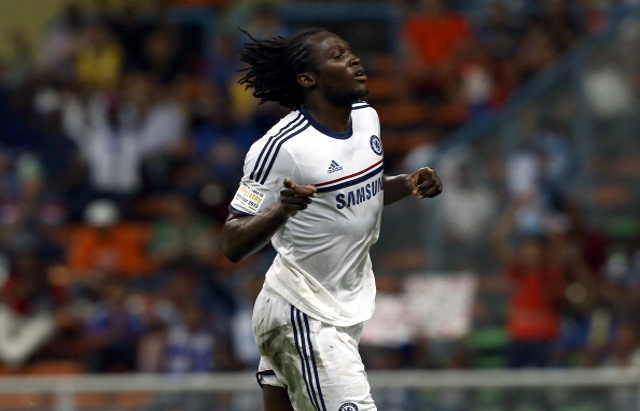 His fine form at the Hawthorns saw him linked with a host of clubs this summer, including Champions League runners-up Borussia Dortmund, and with the likes of Swansea and West Ham hoping to tempt Chelsea into loaning him out once again.

However, Mourinho hinted that he would give Lukaku a chance this season, comparing him to Chelsea legend Didier Drogba. So far Lukaku has barely featured though, with winger Andre Schurrle playing out of position even being preferred by the Portuguese coach in his side’s game against Manchester United on Monday.

This has alerted interest from Arsenal, who are desperate to sign a new striker before the end of the summer transfer window, having missed out on some big-name targets already, including Gonzalo Higuain, Luis Suarez and Michu.

Gunners boss Arsene Wenger is keen for the in-form Olivier Giroud to have some competition upfront, particularly with the news that Lukas Podolski will be out for three weeks after being stretchered off in Tuesday night’s win over Fenerbahce.

Chelsea are unlikely to want to sell a promising youngster to a rival, but with Lukaku keen to be playing regular first-team football, they may find that an offer of £18million is reasonable to offload an unhappy player.

Although it perhaps seems more likely that Ba will leave the club for either Roma or former club Newcastle, Arsenal are big fans of Lukaku and may be in a good position to tempt him to move to the Emirates Stadium, particularly if further signings are brought to Stamford Bridge in the coming days.

Having missed out on Manchester United’s Wayne Rooney, Mourinho is now lining up a move for Anzhi Makhachkala striker Samuel Eto’o, who could be announced as a Chelsea player in the next 24 hours.

Lukaku would be a great addition for Arsenal if they can pull it off, and would help appease the club’s fans after a frustrating summer in the transfer market.