Roman skipper tells the north Londoners that he wants to move to the Emirates this season.

The north London club have so far been quiet in the close season in terms of their transfer dealings, with the Frenchman’s only new recruits to date being those of young Auxerre front man Yaya Sanogo, who moved to the Emirates on a free transfer at the start of last month, and midfield player Mathieu Flamini, with the Frenchman re-joining the Gunners from AC Milan this week, also on a free transfer.

However, with Wenger reportedly armed with a much-publicised transfer war chest estimated at being worth a whopping £70 million, the club are now expected to be busy in the final few days before the window closes on Monday night.

Wenger first wanted to confirm his club’s safe passage into the group stage of this season’s Uefa Champions League for the 16th time in a row under his management, which Arsenal comfortably managed on Tuesday night thanks to a comprehensive 5-0 aggregate win over Turkish giants Fenerbahce in their two-legged qualifying playoff, before deciding if the club need any reinforcements.

But Arsenal’s 2-0 second-leg win at the Emirates came at a price, with Wenger seeing yet more of his first-team players sidelined through injury, the most serious of which was Germany international Lukas Podolski, who tore his hamstring and will now be out of action for ten weeks.

All of which means the Gunners boss now faces a major injury crisis in midfield only weeks into the new campaign, and with the clock slowly ticking down until the transfer window is no longer open, Wenger has been forced to act quickly in order to strengthen in that part of the field. 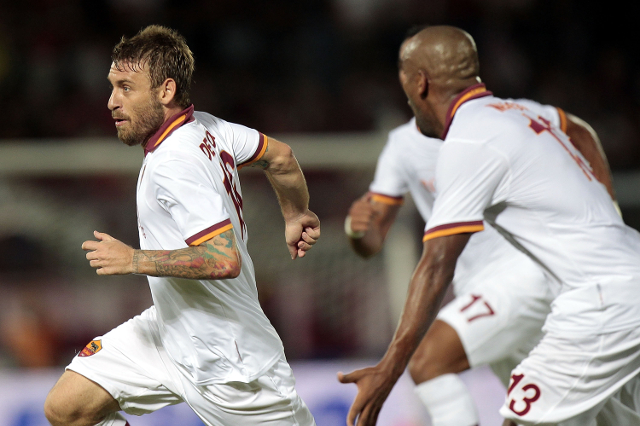 And the player the Arsenal manager has identified as being his number one target is Roma’s coveted Italy international De Rossi, who Wenger has tried to buy in the past, only to fail, like many of his Premier League rivals too.

The in-demand attacking midfield player has a contract in the Italian capital that currently runs until June 2017. however, the 30-year-old has recently made it clear to the Romans that after spending his whole playing career to date at the Stadio Olimpico, he now wants to finally try out a new challenge by playing abroad.

De Rossi has turned down lucrative offers to move to the likes of Chelsea, Manchester United and Real Madrid in the past, but with just one big contract left before he hangs up his boots, the Italian is understood to be willing to move to the capital this season, as long as Arsenal and the Serie A giants can reach an agreement over his transfer fee that is.

Wenger and the Arsenal board are said to be willing to pay up to £15m in order to secure De Rossi’s signature, however, the Giallorossa, mindful of both the reaction of their own fans to selling their captain, and the short amount of time left in the window to bring in a replacement midfield player, are believed to be demanding £20m for their star man.

But with face-to-face negotiations set to continue in London over the weekend, Arsenal are still confident of reaching a compromise deal with Roma in time to be able to unveil De Rossi before midnight on Monday.