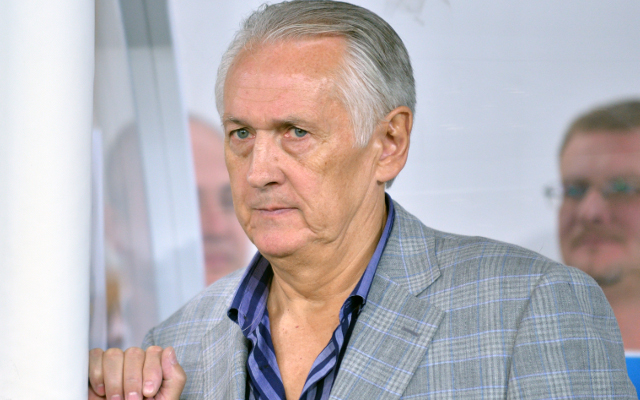 Home side are the form team in Group H going into decisive tie in Ukrainian capital.

Check in to Ukraine vs England

Veteran Ukraine national team head coach Mykhaylo Fomenko was giving little away on the eve of his country’s crucial Fifa World Cup qualifier against England in Kiev on Tuesday night, according to reports in the Daily Express.

The 64-year-old has revitalised the home side’s qualifying campaign after taking over from previous manager Oleg Blokhin towards the back-end of last year, guiding Ukraine to vital Group H victories over the likes of Poland, Moldova, Montengero and San Marino in succession.

And it is that of recent run of form that has lifted the Eastern Europeans back into contention to qualify automatically as group winners for next summer’s World Cup finals in Brazil, with Fomenko and Co currently sitting pretty in third place in the standings, just a point behind leaders England going into Tuesday evening’s contest at the 70,000-capacity Olympic stadium in the Ukrainian capital.

However, the former Dynamo Kiev defender was keeping his cards close to his chest in his pre-match press conference on the eve of the Three Lions’ visit, especially on the subject of new England front man Rickie Lambert, who is expected to lead the line for Roy Hodgson’s side in Kiev.

“It’s a secret,” was all Fomenko would say when asked what he knew of the Southampton striker, while he was equally cagey when pressed to comment on what effect the absence of injured forward Wayne Rooney would have on England’s chances in Ukraine, remarking only that: “You will have to put this question to the England manager.”