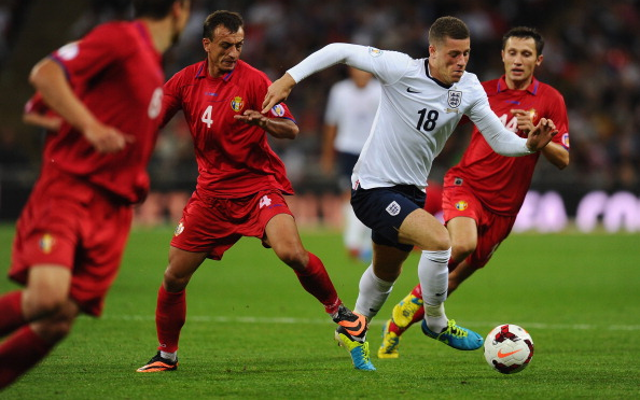 Manchester United manager is focusing his attention on youth this January, as he hopes to sign both Everton starlet Ross Barkley and Derby County prospect Will Hughes, CaughtOffside can reveal.

The pair are two of the country’s best prospects at the moment, and could form a fine midfield partnership for the Red Devils for the next decade or so if Moyes is successful in signing them both, for what could be a combined fee of around £30m.

Midfielders have been high on the Scot’s agenda for much of the summer, with United missing out on the likes of Ander Herrera, Thiago Alcantara and Cesc Fabregas in the transfer market, though they did manage to secure the signing of Belgian powerhouse Marouane Fellaini on deadline day for a fee of £27.5m.

Still, Moyes is keen to improve his options in the middle of the park, as 32-year-old Michael Carrick heads towards the final years of his career and the likes of Tom Cleverley and Anderson continue to prove inconsistent as regular features of the side, with the latter possibly nearing an exit from the club in January as Juventus are said to be showing an interest.

Everton’s Barkley, 19, has been in fine form for Roberto Martinez’s side this season, earning his first call-up to the England national team in their recent round of World Cup qualifying matches, and the youngster has also been linked with United’s rivals Chelsea.

However, Barkley knows Moyes well from his time at Goodison Park, and may feel he would prefer to continue his development under him at his new position as manager of United, who are also more well known for handing opportunities to youngsters than Chelsea in recent times.

While the Toffees starlet would no doubt be expensive at around £20m, he would likely become a part of the first-team setup at Old Trafford straight away, while Moyes plans to loan Hughes back to Derby on successful completion of a £10m move.

The 18-year-old has been a key player for Nigel Clough’s side in recent seasons, attracting interest from the likes of Arsenal and Liverpool after drawing comparisons with Barcelona duo Xavi and Andres Iniesta for his skillful and intelligent style of play.

An ideal long-term replacement for the recently-retired Paul Scholes, the playmaker would become part of the first-team picture at United next season after one more full season in the Championship, in a similar fashion to United’s recent signing Wilfried Zaha, who was signed last January and loaned back to Crystal Palace for the remainder of the campaign before linking up with the Premier League champions this summer.

Both clubs have made it clear they won’t sell their prized assets for cheap, but United are ready to make a big investment in two of the best up-and-coming young talents in England.