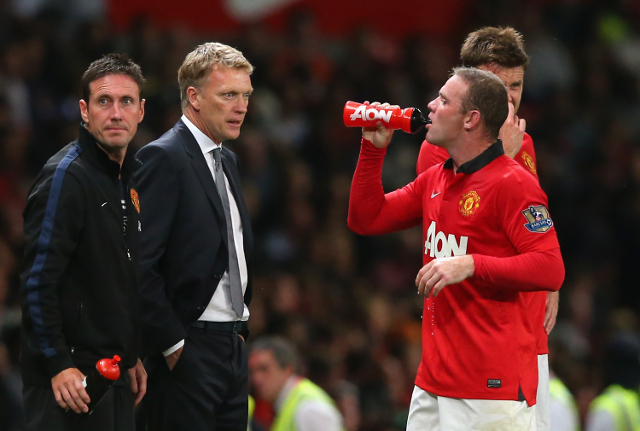 Manchester United striker Wayne Rooney has hinted that he is preferring life at the club under the regime of new manager David Moyes, according to the Daily Mirror.

The England international often seemed to have a slightly strained relationship with previous manager Sir Alex Ferguson, and it was he that claimed Rooney wanted to leave the club at the end of last season after submitting a transfer request. Chelsea then seemed likely to lure him to Stamford Bridge towards the end of the summer transfer window.

However, the former Everton star seemed to later be persuaded to stay with the Red Devils by new manager Moyes, whom he first played under as a youngster at Goodison Park.

Rooney scored twice for United against Bayer Leverkusen on Tuesday night to take his overall tally for the club to 200, and the 27-year-old admits he is benefiting from the new, more “intense” training methods under Moyes.

“I feel good,” he said. “I’ve had some good training the last few weeks. It’s been stop-start with the injuries, but I’ve just kept my head down and worked hard and now I’ve played and got some goals.

“I feel great. The training is a bit different under the new manager – I remember it from Everton, it’s more intense. That’s helping me.”

Rooney added that he is not surprised that Moyes was named as Ferguson’s successor, saying he deserves the recognition for his fine work at Everton, even though many pointed to his lack of silverware at his old club as a concern for making the step up to United.

“He’s a great manager and thoroughly deserves this job because of what he did at Everton,” he added. “It’s good to work under him and hopefully be successful together.”