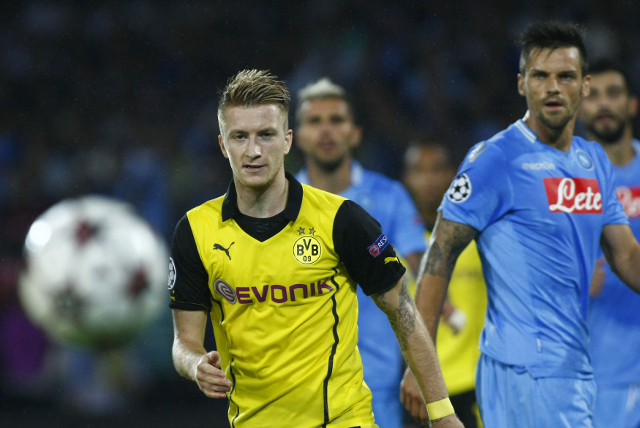 Gunners have been keeping close tabs on Germany international since 2012.

Arsenal are planning a sensational swoop for coveted Borussia Dortmund attacking midfield player Marco Reus at the end of this campaign as head coach Arsene Wenger looks to bring in yet more world-class stars to the Emirates.

The north London club caused huge surprise throughout the world of football when they splashed out a whopping £42.4 million to sign in-demand Real Madrid playmaker Mesut Ozil in the final hours of transfer deadline day, with the Germany international easily becoming the Gunners’ most expensive player ever, beating the £15m they paid to sign Santi Cazorla from Malaga last August.

However, Ozil’s arrival in the capital has signified a major shift in Wenger’s transfer policy since he first arrived at the club 17 years ago, with the Frenchman finally now prepared to go head to head with some of Europe’s big spenders in order to bring the star players to Arsenal that he had previously seemed so reluctant to do.

And with Wenger still armed with much of the £70m transfer war chest from the close season after only bringing in Ozil, front man Yaya Sanogo on a free transfer from Auxerre, Palermo goalkeeper Emiliano Viviano on a season-long loan and former midfielder Mathieu Flamini from AC Milan, also on a free, American owner Stan Kroenke is believed to have promised the Gunners boss up to £30m more to spend on new players.

Wenger has in recent seasons switched his transfer focus away from firstly his homeland, where he always used to shop for new players after first arriving at Highbury in 1996, and then later the Spanish market, towards the Bundesliga of late, with the Gunners having signed the likes of Germany internationals Jens Lehmann, Per Mertesacker, Lukas Podolski and now Ozil in recent times.

And the next German star said to be on Wenger’s wish list is that of Dortmund’s highly rated wide man Reus, a player who has really caught the attention of much of the Continent in recent seasons following a number of high-class displays for his club, both domestically and in the Uefa Champions League too.

The wily Frenchman is known to keep a dossier on all possible new recruits to the Emirates, and he then sends his chief scout Steve Rowley to watch those intended targets in action first hand, before  making further background checks into the player’s off-field personality and temperament, before coming to a final decision about whether to make a move or not.

In the case of Reus, it is understood that the Gunners have been closely monitoring the 24-year-old ever since he decided to move to Dortmund from fellow Bundesliga outfit Borussia Monchengladbach in January 2012, with the blond-haired midfield player arriving in the Ruhr Valley on a five-year deal for a fee of 17.1m euros.

And after having scored an impressive 26 goals in total in just 59 matches in all competitions for Jurgen Klopp’s men during that time, including 18 strikes in only 42 league contests for Dortmund, Wenger has now made up his mind that Reus is a player who has the skills, nous, and goalscoring capabilities from midfield to take the Gunners on to the next level.

However, Wenger also realises that it will not be easy to be able to convince the Germans to part company with one of their star players, especially with Reus currently contracted to last season’s Uefa Champions League runners-up until June 30 2017.

Equally, though, Arsenal know from recent years that Dortmund are a selling club and if the right financial package is presented to them for Reus, then it is believed they will be willing to allow the forward to move to north London next summer for a fee somewhere in the region of £30m.