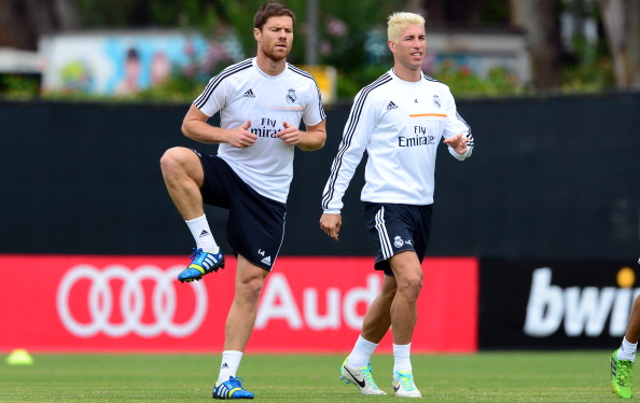 Check in to Elche vs Real Madrid

Real Madrid midfielder Xabi Alonso is said to be attracting strong interest from both AC Milan and Inter Milan in the final year of his contract at the Bernabeu, according to Inside Futbol.

The former Liverpool star joined Real in 2009 and has been a key performer for the side ever since, though he is yet to agree a contract extension with the Spanish giants.

This would see Alonso become a free agent next summer, and it is looking increasingly likely that he will not be kept at the club and move elsewhere, with a number of other teams also said to be interested.

Another Italian side, Juventus, have also been linked with the 31-year-old, while his old side Liverpool were thought to be keen on bringing him back to Anfield during the summer transfer window.

Alonso is currently out injured for the next two months, which could see him fall even further down the pecking order at the club due to the arrivals over the summer of Asier Illarramendi and Casemiro.

The emergence of these two talented youngsters may convince manager Carlo Ancelotti that Alonso is no longer needed at the club, though he would represent a great free transfer for most top sides around Europe.