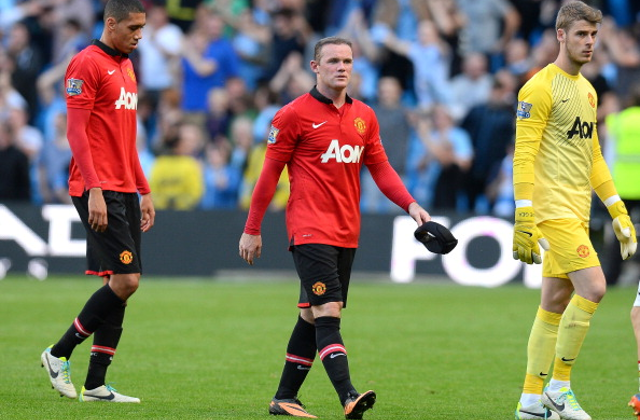 Manchester United striker Wayne Rooney was critical of his side’s defending in Sunday’s 4-1 thrashing at the hands of rivals Manchester City, ESPN reports.

The 27-year-old fired a late consolation goal from a superbly-taken free-kick, though that was the only positive in an otherwise disappointing display from David Moyes’ side, who were caught out at the back all too often as City roared into a 4-0 lead.

Three of the four goals came from poorly-defended crosses, while Yaya Toure was left completely unmarked from a corner to stab home his side’s second on the stroke of half time, in an uncharacteristically weak defensive performance from the Premier League champions.

The defeat leaves United five points behind joint-Premier League leaders Arsenal and Tottenham, and continues an uncertain start to life under new manager Moyes, who took over from Sir Alex Ferguson after his retirement at the end of last season.

Rooney was disappointed to lose by such a heavy margin, and feels his side will have to improve defensively if they are to turn things around on the pitch.

“It’s not nice to lose to City by four goals to one. To lose by any score is bad, so we’re all really disappointed,” he said.

“The way we conceded the goals, one just before half-time and two straight after, is not good enough. We know we have to improve on that, to stop giving these sloppy goals away and capitalise on some of our good play.”

Rooney has been one of United’s best players this season, despite appearing to seek a move away from the club for much of the summer.