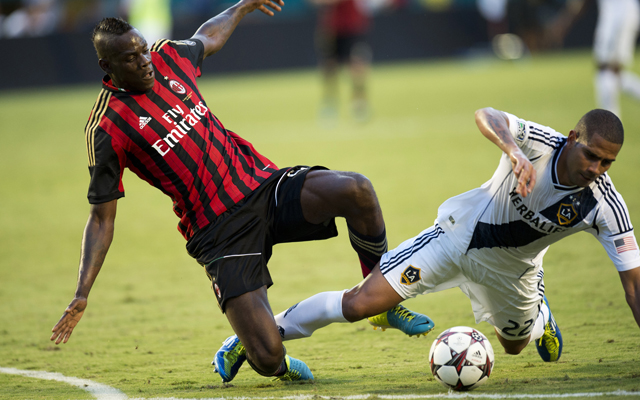 Check in to AC Milan vs Sampdoria

AC Milan coach Massimiliano Allegri has warned striker Mario Balotelli to stop acting like a child after he received a ban for threatening to kill the referee that sent him off after the game against Napoli last weekend, the Daily Mail reports.

The outspoken forward has displayed some relatively good behaviour since joining the club from Manchester City back in January, but has now received his first serious ticking off after making ‘insulting and intimidating’ comments towards the match official on Sunday.

His dismissal came after the final whistle of the club’s 2-1 defeat to Napoli, which had already been a frustrating game for the Italian international as he had missed a penalty for the first time in his career earlier on.

Allegri could understand the player’s frustration, but believes he should keep his temper in check as any such future outbursts will only serve to harm the team.

“Mario is 23 years old, he is no longer a child,” Allegri told reporters about Balotelli’s dismissal for insulting the referee at the end of the 2-1 home defeat by Napoli.

“To be a champion you have to have the right behaviour because you are an example to all those who are watching you,’ Allegri told reporters.

“Mario has made a mistake, penalising the team, the club and the supporters and he must change this behaviour.”

Allegri also said that he believes Super Mario’s attitude is hurting him on the pitch when it comes to currying favour with match officials too.

“Mario should help the referees to protect him,’ he added. ‘The referees have left him (unprotected) because they can be influenced by negative attitudes.

“I hope that he realises he put the team in difficulty.

“When the game is over, you need to go into the dressing room, calm down and think about working to improve.”

“The players should think about playing and not about the referee’s decisions,” he added. “When the game ends, you should leave the field, possibly greeting the referee politely.”

“Mario is a world-renowned player who represents the Italian national team. I think he has every chance of understanding and growing. He is an important player for Milan and should behave like a champion.

“Until now, Mario has always behaved well. He got it wrong on Sunday and I hope that serves as a lesson.”