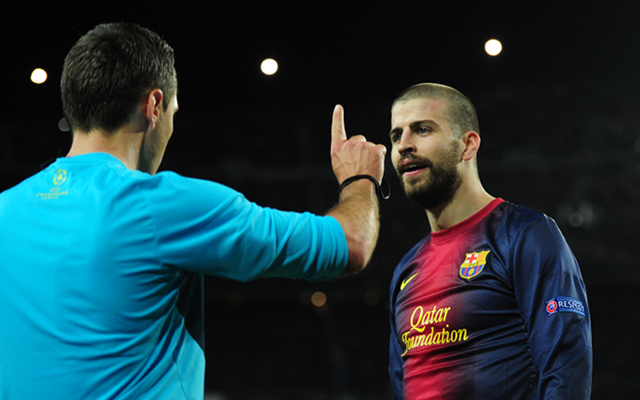 Ancelotti’s side need the help of a highly debatable last-minute spot kick to overcome newly promoted side.

FC Barcelona defender Gerard Pique has caused yet more controversy in La Liga after making an inflammatory tweet during arch-rivals Real Madrid’s league encounter with lowly Elche on Wednesday night, according to reports in the Daily Mail.

The Spain international was watching los Blancos take on the newly promoted side in a match that appeared to be heading for a shock draw, that is until experienced referee Cesar Muniz awarded Carlo Ancelotti’s side a hugely debatable spot kick in the 96th and final minute of the match.

Unsurprisingly, Portuguese superstar Cristiano Ronaldo tucked away the resultant penalty to hand the visitors an undeserved 2-1 win after having earlier opening the scoring himself in the second half with a now trademark long-range free kick, and the win kept the Spanish giants just two points behind early pace-setters Barcelona and Atletico Madrid at the top of the table.

However, Barca centre-back Pique was clearly not convinced either about Muniz’s decision to award Madrid their late penalty, with the Spaniard immediately tweeting to his many thousands of followers: “Watching a great comedy on Canal + Liga.”

And within hours, the 26-year-old’s message had then been retweeted 45,000 times, once again causing a huge storm in Spain, as Madrid full-back Alvaro Arbeloa responded to his compatriot’s jibe by saying: “It’s nice to see some people swapping the theatre for a bit of cinema.”