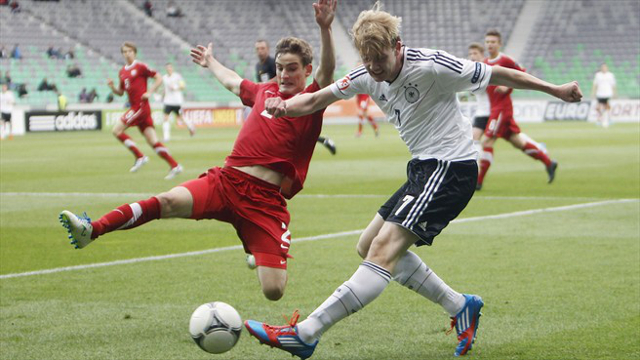 Bundesliga giants Bayern Munich and Borussia Dortmund look set to compete with Chelsea for the signing of highly-rated Wolfsburg teenager Julian Brandt, according to Bild.

The 17-year-old German youth international is yet to make his debut for Wolfsburg at senior level, though his performances for club and country at youth level have caught the eye of several top clubs in recent times.

With Brandt yet to sign a professional contract with the club, he could move for free next summer, with a compensation fee to be agreed at a tribunal, meaning the likes of Chelsea are keen to land this highly-rated youngster on the cheap.

However, the Blues will now face strong competition from Germany’s two biggest clubs at present, with Bayern Munich and Borussia Dortmund keen to continue their recent dominance on the domestic and European scene by snapping up the country’s best talent.

Wolfsburg general manager Klaus Allofs also claims there is interest in Brandt from several clubs in Italy, and while he conceded they cannot force the teenager to stay with the club, he is hopeful that he will continue his education with them.

“It’s nothing new that clubs from England and Italy are wanting to sign Julian Brandt,” Allofs said.

“He has received a good schooling at our club.

“We have already told him about his options and the chances he will get if he stays. But we cannot force him to sign on with us.”