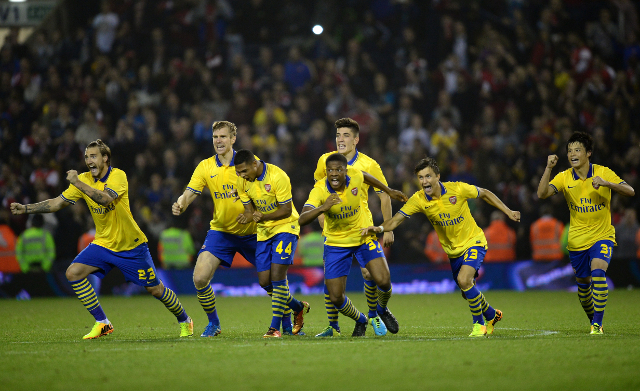 The full draw for the Capital One Cup fourth round.

Arsenal have been handed a difficult yet mouthwatering tie with fellow London heavyweights Chelsea after overcoming West Bromwich Albion on penalties this week.

Chelsea overcame Swindon Town in their own tie, but will have to go to the Emirates in the hope of progressing.

Manchester United will have a slightly easier task after eking past Liverpool by a goal to nil by hosting Norwich City. Javier Hernandez’s goal was enough to secure safe passage into the next round for David Moyes’ men.

“You always want a home draw if you can get it,” Moyes said.

“Norwich are a good side, they have got a good manager and we will give them every respect.”

Elsewhere, holders Swansea City were knocked out by Championship side Birmingham City, and will now come up against Mark Hughes’ Stoke City as their reward.

Newcastle will host Manchester City after they dumped Leeds out of the cup and Hull City will face Tottenham Hotspur just days after travelling to White Heart Lane in the league.