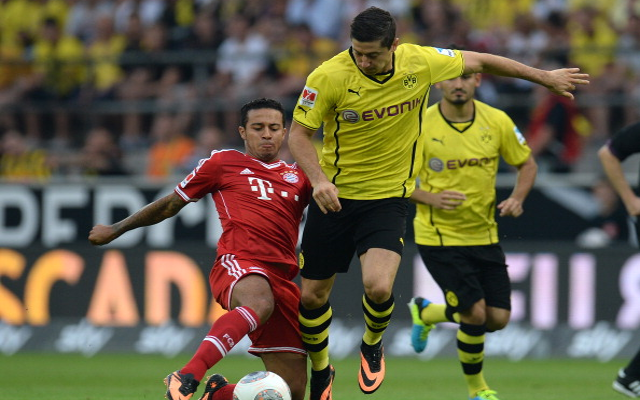 Borussia Dortmund striker Robert Lewandowski has backtracked from reports that he has agreed a deal to join Bayern Munich next season, according to the Daily Mirror.

The Polish striker has emerged as one of the best players in Europe during his time with Dortmund, though he has been widely tipped to leave the club for their rivals Bayern Munich for some time now.

The likes of Manchester United and Chelsea have also been strongly linked as admirers of Lewandowski, though they looked to have been dealt the blow that he’d agreed a move to Bayern yesterday.

They may gain renewed hope now, as Lewandowski has claimed his quotes were somewhat taken out of context, as he was only discussing the possibility of speaking to new clubs in January ahead of a potential free transfer in the summer.

However, while he has maintained that he will be leaving Dortmund, the prolific forward would not confirm that he had chosen a new club for the moment.

“I was a bit shocked after I saw the video of Tuesday’s interview. I only wanted to make clear that I cannot sign a contract anywhere until January,” he said.

“My only intention was to answer the question about when I would clarify my future.

“Like I’ve already said before, I intend to leave BVB in the summer. I cannot say anything else about it until January.”

Lewandowski could be the second player to switch Dortmund for Bayern in the space of a year, with Mario Goetze making the same move at the end of last season.