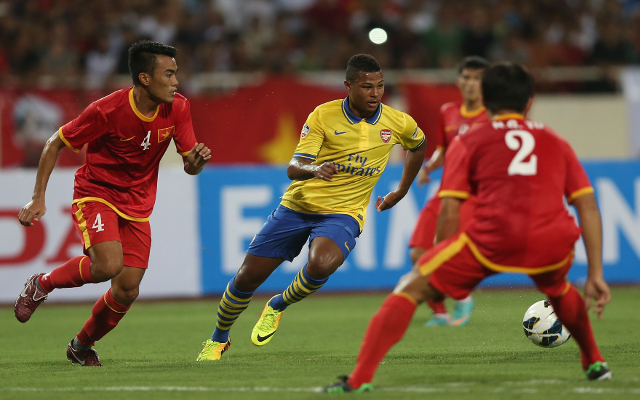 The 18-year-old is rated as one of the best up-and-coming talents at the Emirates Stadium at the moment, and has recently seen himself fast-tracked into the club’s first-team due to an injury sustained by first-choice right-winger Theo Walcott.

In just his second start in the Premier League, Gnabry opened the scoring with a well-taken goal in a crucial win against Swansea, which helped take the Gunners to the top of the table.

Wenger was understandably pleased to see the youngster get off the mark, and has praised Gnabry for his personality as well as his ability following his unexpected promotion to the starting lineup.

“He is surprising,” Wenger said. “He has the talent, but he has the personality on the pitch as well.

“He doesn’t look timid, he looks to play with belief and, of course, talent. Unfortunately he is another player for Germany, he’s not English.”

The Frenchman, who celebrated 17 years in charge of Arsenal this weekend, added that it feels pretty surreal to now be managing players who were babies or not even born yet when he first joined the club as manager back in 1996.

“He was one-year-old when I came to Arsenal, I can’t believe it. Now I have some players in my squad who were not born when I arrived at Arsenal,” he said.

Gnabry, a German Under-19 international, started his career back in the Bundesliga with Stuttgart, before joining Arsenal’s youth team in 2011.