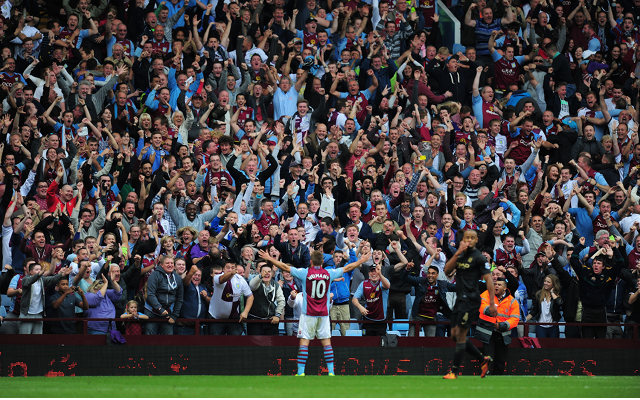 Striker believes young core will get stronger over time.

Check in to Hull City vs Aston Villa

Aston Villa striker Andreas Weimann has hailed the club’s youthful approach this season and believes that the spine of the team will only grow stronger as the campaign progresses, Sky Sports reports.

The Austrian hitman bagged his first league goal of the season in Villa’s 3-2 victory over title contenders Manchester City on Saturday and is just one of the eight players under 25 that were in the starting XI that day.

Despite struggling against relegation for much of last season, there are signs that Villa are growing under the management of Paul Lambert, whose faith in his young players seems to be starting to pay off.

The 22-year-old now hopes that he and his young teammates can now learn and grow together.

“The whole team, it showed on Saturday again, we are all in it together,” he told Sky Sports News.

“We all want to be together and understand each other, we are a young team of the same age and obviously it helps us.

“We have that attitude where we will go to the end and that showed on Saturday.”

Villa currently sit in ninth place in the Premier League table with three victories and three defeats from their opening six games, and Weimann is confident that he will be able to continue to shine in the absence of star striker Christian Benteke.

“Obviously we know Christian has scored loads of goals,” he added, “but we had Gabby [Agbonlahor] out as well.

“We have that tight group where even he was saying we can play without him and we showed that on Saturday.

“We are looking forward to Hull on Saturday and we will try and win it. They have come up and won a few games but we have done that and will try and take three points.

“They will be full of confidence like us and hopefully it will be a good game with us coming out on top.”