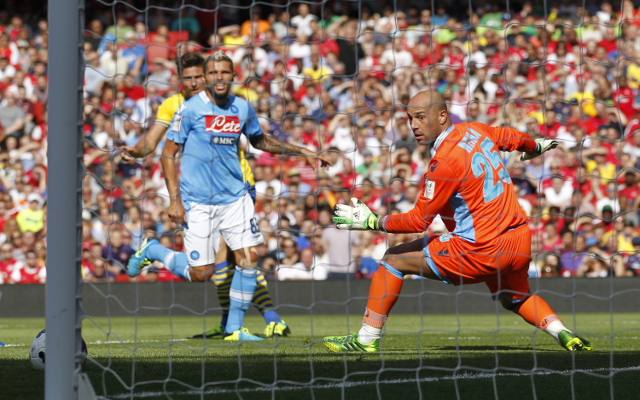 Napoli sporting director Riccardo Bigon has played down his club’s chances of keeping on-loan Liverpool goalkeeper on a permanent deal beyond this season, according to talkSPORT.

The Spanish shot-stopper has joined the club for the 2013/14 campaign after falling out of favour at Anfield, which had also led to speculation that he could make a permanent move away from Liverpool.

Barcelona have been linked several times with the 31-year-old, and may still be the favourites to sign him next summer when his loan spell in Serie A comes to an end, as the Catalan giants are desperate to recruit a replacement in goal for the departing Victor Valdes.

Reina first joined Liverpool in 2005, becoming a key player for the club before slowly losing his best form in his latter years with the club, which saw manager Brendan Rodgers sign a replacement in Simon Mignolet this summer.

However, Napoli are not confident of keeping hold of the former Villareal man, as they believe he will be heading back to Liverpool at the end of his loan spell next summer.

“Will Reina stay? At the end of the year he will return to Liverpool,” he said.
“
In life you can re-examine everything, but to date Reina is a player of Liverpool. It’s too early to talk about it – at that moment we could only take him on loan.”

Reina has performed well so far in Italy, saving a crucial penalty from Mario Balotelli as his side earned a surprise win away to AC Milan.