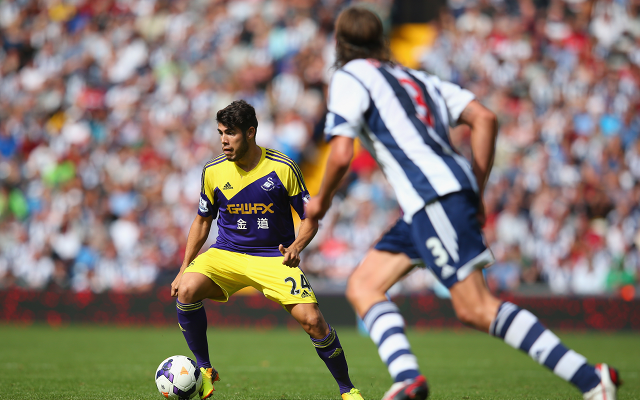 Check in to Swansea City vs St Gallen

Pozuelo linked up with the Swans on a three year deal from Spanish side Real Betis alongside teammate Jose Canas. The 22-year-old cost the Welsh side less than £500,000, a whopping £8m less than Brazilian trickster Coutinho cost Liverpool when he moved from Inter Milan in January.

And Laudrup sees a similarity between the two players and has urged the Spaniard to push himself to achieve the same impact.

“I think Alejandro can do here what Coutinho has done at Liverpool,” Laudrup told the South Wales Evening Post.

“I remember when Coutinho arrived. He came from Inter and he had a lot to learn, but now he is one of the most important players at Liverpool.

“With time, Pozuelo can do the same here because he has the same ability with the ball.

“He can find space, he is good one-on-one and has two good feet – we don’t know if he is right-footed or left-footed. He also has very good vision.”

Pozuelo has yet to start a game in the Premier League, making just five appearances from the bench, but he has been a key figure in the club’s debut Europa League campaign.

He scored in the qualifying ties against Malmo and Petrolul Ploiesti, and also played the full 90 minutes in the impressive 3-0 win at Valencia which kicked off their Group A challenge.

“It was a dream start in the group stage for us,” said Pozuelo. “A victory like that over a team like Valencia gives you motivation for the next games.

“I was lucky to play 90 minutes and it was special, particularly as it was on Spanish TV.”

Pozuelo will also hope to be involved in Thursday’s encounter with St Gallen and force himself into Laudrup’s plans for the forthcoming league fixtures against Southampton, Sunderland and West Ham.

“I think I’m dealing quite well with the change in culture from Spain to here,” he added.

“I’m still adapting to the team and the manager, but I can’t complain about anything.

“The manager is giving me confidence and games, and I’m very happy. We have a big squad and we can’t all play. The manager makes the decisions and I’m happy with them.

“I hope to play as much as possible, and it is helpful knowing the manager is confident enough to play me.

“He and my team-mates are helping me adapt, while the fans are very warm. They always make you feel welcome and that helps me to settle here.”