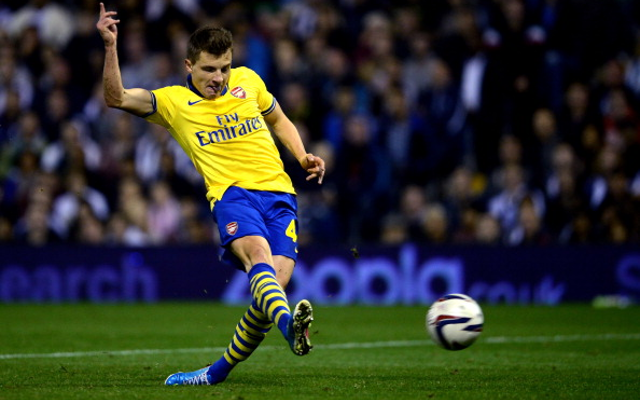 Aston Villa and Southampton are said to be leading the chase among several Premier League sides for the loan signing of Arsenal youngster Thomas Eisfeld this January, CaughtOffside understands.

The 20-year-old is a highly rated prospect at the Emirates Stadium, and recently impressed in the Capital One Cup with a well-taken goal to give the Gunners the lead against West Brom at the Hawthorns, though he faces something of a tough task to break into the club’s first-team at the moment with some high class competition in fine form.

Arsenal have been on fire so far this season, with the £42.4m summer signing of Mesut Ozil breathing new life into the side, and bringing the best out of the likes of Aaron Ramsey and Jack Wilshere, with Santi Cazorla, Theo Walcott and Alex Oxlade-Chamberlain still to return from injury.

This could mean Eisfeld’s first-team appearances are limited to League Cup outings, but the young German will be keen to start playing more regular football and gain some valuable experience at the top level, and it seems increasingly likely that he will have options to choose from when the transfer window re-opens at the midway point of the season.

Aston Villa are keen to keep bringing in young players on the cheap, and would be interested in signing Eisfeld on loan with a view to a permanent move, though Arsenal are perhaps unlikely to consider selling the former Borussia Dortmund youngster too soon.

Southampton are also interested in the qualities of Eisfeld, with the German playing the kind of technical football that Saints manager Mauricio Pochettino is keen on developing at the St Mary’s Stadium, and the Argentine hopes the Arsenal youngster can help his side provide more ammunition to the likes of Pablo Osvaldo and Rickie Lambert upfront.

Pochettino had been keen on a loan signing before the passing of the summer transfer deadline, though Southampton missed out to Liverpool for a deal to bring in Victor Moses from Chelsea for the season.

Cardiff City, Fulham and Norwich are also said to be monitoring Eisfeld’s situation, and Arsenal are open to offers for the up-and-coming talent, as they understand his need to continue his development with regular top flight football.

Eisfeld was a highly rated prospect at former club Borussia Dortmund, before being snapped up by the Gunners in 2012. Arsene Wenger has recently compared his style of play with club legend Robert Pires.