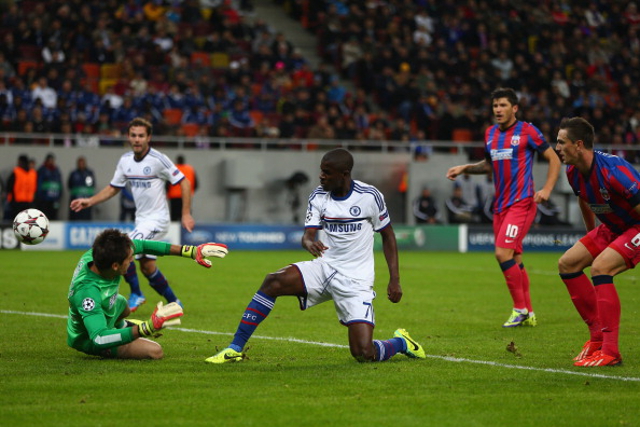 Real Madrid manager Carlo Ancelotti will reportedly look to raid his old club Chelsea this January as he seeks to turn things around for his team in the second half of the season and catch Barcelona in the title race.

The Italian coach’s target will be Brazilian international midfielder Ramires, who he hopes will add some much-needed steel to his side’s midfield, with Xabi Alonso out injured and summer signing Asier Illarramendi struggling to settle in at the Bernabeu.

Real Madrid’s latest setback in La Liga, a 1-0 home defeat to local rivals Atletico Madrid, leaves them five points behind Barcelona already this season, and with something of a mountain to climb to catch the reigning champions.

Ancelotti knows Ramires well, having signed him from Benfica during his time as Chelsea manager, and the 26-year-old has gone on to become a key player for the Blues, regularly starting as a box-to-box midfielder and showing all the qualities Real Madrid need in their engine room at the moment.

Strong in the tackle and hard-working, Ramires is also a reliable source of goals and gets forward to good effect to aid his side’s attack, and as such he is likely to command a hefty transfer fee if Real Madrid come calling.

Chelsea will likely ask for £30m or more for the combative midfielder, as they see him as a big part of their future. He is also a popular figure at Stamford Bridge, which has a strong Brazilian contingent at the club along with the likes of David Luiz, Oscar and Willian.

Jose Mourinho, who left Real Madrid as manager at the end of last season to return for a second spell in charge of Chelsea, will also be doubly keen not to sell to his old club, after leaving on something of a sour note after a difficult season last year.

However, Real Madrid will try their luck in a bid to strengthen their midfield, in what could be a double raid on the Premier League this January as they also look to revive their interest in Liverpool star Luis Suarez.

The Uruguayan striker was a top target for the club during the summer, though the Reds held firm in keeping the want-away 26-year-old at Anfield. Real hope that this time a bid of around £45m can tempt Liverpool into selling their prized asset.