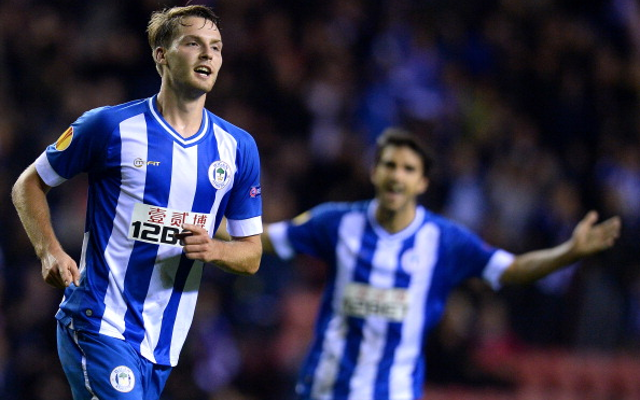 Check in to Wigan Athletic vs Blackburn Rovers

Wigan manager Owen Coyle says he is excited about the potential of on-loan Manchester United youngster Nick Powell, according to the Independent.

The 19-year-old is currently on a season-long loan deal with the Championship club from Premier League champions United, after he failed to break into their first-team there since signing from Crewe last year.

However, Powell has been a highly impressive performer in his time spent in the lower leagues, and looks to be keeping that up with his performances for Coyle’s side so far this season.

The attacking midfielder already has three goals in six games for the club, including two memorable efforts in Thursday night’s Europa League victory over Slovenian side Maribor.

Coyle believes Powell can go on to be a big success for United and for England in the future, and thinks his time spent at Wigan could be good for his long-term development.

The former Bolton manager has previously helped launch the careers of the likes of Jack Wilshere and Daniel Sturridge, who both spent time on loan at the Reebok Stadium during his time in charge there, before going on to become regulars for their parent clubs.

“We brought him here because I believe he’s a top player in the making and nights like this will certainly help,” Coyle said.

“He’s got so much to offer. I want it on a consistent basis, and I’m trying to demand that of him to help him progress his career.

“I’ve been fortunate to be able to do that before with a couple of very good players and I see Nick Powell in that category.

“I’ve no doubt when you see Jack Wilshere and Daniel Sturridge, the level they’re playing at, both England players, I truly believe that in time Nick Powell can attain that level.

“To do that he’s got to bring performances like this on a consistent basis and show that after his year’s loan, when he goes back to Manchester United, that he’s in a position to challenge for their first team.

“And if he is, given the level they play at, that would then push him towards the England limelight. He’s a bit off that yet but he’s certainly got the ingredients that we can help to move him forward.”