CaughtOffside understands that the Stamford Bridge manager is a big admirer of the 25 year old Mexican international and believes that the Old Trafford bit part player could be the ideal man to strengthen his misfiring Blues attack.

Chelsea have thus far this term had to rely heavily on the goal-scoring efforts of their midfield and wide attackers with the likes of Samuel Eto’o, Fernando Torres, Demba Ba and Andre Schurrle all struggling for form, indeed worryingly for Mourinho not one of his striking quartet has managed a Premier League goal this season. 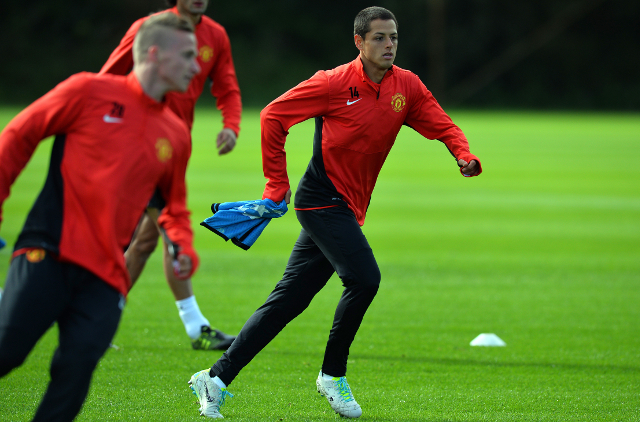 If Chicharito was hopeful of his standing in Man United’s first team set-up would improve under David Moyes he will have seen such hopes vanish after once again being left out of the Premier League side’s starting eleven for much of the current campaign.

Under Sir Alex Ferguson the Guadalajara born forward managed 42 Premier League starts in three seasons, still racking up a thoroughly laudable 33 domestic league goals in the process. However this season the instinctive finisher has picked up just one Premier League start in the club’s opening seven fixtures and Hernandez may now be wondering about his future prospects at Old Trafford.

Though Hernandez is still tied down to a long term deal Man United may well consider offers for his services, especially if Wayne Rooney is to remain at the club. That said it may prove tough to convince David Moyes to sell the striker to a direct Premier League rival.

Hernandez has made a total of 122 appearances for Man United since joining the club in July 2010, 49 of which came from the bench, scoring 51 goals in the process.