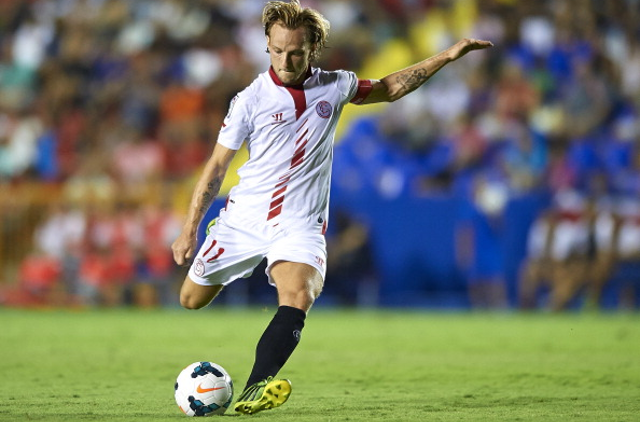 Manchester United could be set to compete with Liverpool for the signing of impressive Sevilla midfielder Ivan Rakitic this January, CaughtOffside understands.

The Croatian international, who was appointed club captain by Sevilla this season, has been one of the club’s best performers over the last couple of years and his fine displays have started to attract serious attention from top sides.

Liverpool had looked closely at signing him over the summer before opting to pursue other targets, though having failed to land the likes of Christian Eriksen, Willian and Henrikh Mkhitaryan, they could make Rakitic a top target again this January.

A skillful and creative box-to-box midfielder, Rakitic would also be an ideal signing for Manchester United, and it is understood that David Moyes has now identified the 25-year-old as another possible candidate to solve his side’s problems in the middle of the park.

Still lacking a true playmaker since the retirement of Paul Scholes at the end of last season, United tried and failed with bids for the likes of Thiago Alcantara, Cesc Fabregas and Kevin Strootman during the summer, though they also see likely to try again for Athletic Bilbao’s Ander Herrera when the transfer window re-opens.

This could give Liverpool some edge in their pursuit of Rakitic, as Brendan Rodgers is reportedly ready to make the Sevilla star his top priority in January, as he looks to have all the abilities to replace the influence of Xabi Alonso, who is still arguably missed by the Reds since his sale to Real Madrid in 2009.

Rakitic contributed 8 goals and 10 assists for Sevilla in La Liga last season, putting him behind only the likes of Andres Iniesta, Mesut Ozil, Lionel Messi, Cesc Fabregas and Karim Benzema as the league’s best creators, and he has started this season in similarly strong form, with 4 goals and 2 assists in his first 8 games.

Sevilla will be reluctant to sell such an influential player, particularly as they only recently made him captain, and had to deal with the sales of key players such as Alvaro Negredo, Jesus Navas and Geoffrey Kondogbia over the summer.

However, with both United and Liverpool ready to pay around £20m for Rakitic’s services, Sevilla may find the money is too good to turn down, and Rakitic himself may feel he is ready to prove himself at a bigger club.

The former Schalke player has previously spoken of being flattered by interest from Liverpool, and would appear to be open to playing in the Premier League in the future.