Reds want the Spain international to help add more goals from the centre of park next year.

Liverpool head coach Brendan Rodgers is understood to be preparing a big-money offer for highly rated Atletico Madrid youngster Koke for when the winter transfer window finally opens once again for business for the year in January.

The Merseyside giants are said to currently be assessing the strengths and weaknesses of their squad now that the Premier League has just taken a break for the forthcoming Fifa World Cup qualifiers, with the Northern Irishman due to sit down with his backroom staff to ascertain just which positions the club need to bring in more top-quality players to fill in the new year.

Rodgers has asked his closest staff members and all of his main scouts to provide him with a list of two possible new recruits for each position which the Reds can go after, if necessary, at the turn of the year, with it believed that the Merseysiders are keen to add more strength in particular in the midfield area, and especially when it comes to attacking midfield players with an eye for goal.

The Liverpool boss is currently happy with his defensive midfield options in front of the back four, with Brazil international Lucas Leiva now one of the manager’s first names down on his team-sheet, while both captain Steven Gerrard and England international Jordan Henderson are also capable of filling that role too.

However, in recent weeks Rodgers had discovered that while his front men are currently both on fire in front of goal, with Daniel Sturridge and the returning Luis Suarez having been banging in the goals for fun of late, hitting the target from the midfield areas has proved slightly more problematic.

In fact, Premier League strikes from open play from the likes of Gerrard, Henderson, Lucas, Philippe Coutinho, Raheem Sterling and Luis Alberto have been extremely rare, if not non existent, so far in this campaign.

And that is why Rodgers asked his scouting network to come up with a wish list of possible attacking midfield targets for him to take to the club’s American owners, the Fenway Sports Group, with a view to managing director Ian Ayre going after them in the January window.

Rodgers is understood to be hugely concerned at present that the Merseysiders’ brilliant start to the Premier League season – Liverpool currently sit joint top of the table alongside Arsenal, albeit in second place behind the north London club on goal difference – may be undermined by a lack of goals from the centre of the park, with the team then becoming too reliant on their front two for the strikes to keep them winning matches. 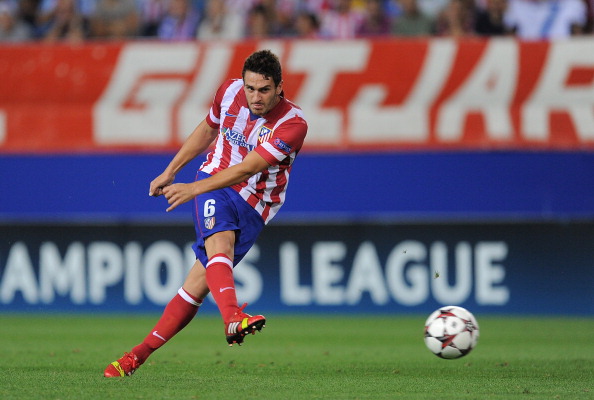 And interestingly, the Liverpool boss was presented with the name of the Atletico midfield player by a number of his scouts, with his Spain-based spy understood to have highly recommended the 21-year-old to Rodgers during recent discussions on the matter.

The highly promising Spain international has been at the Vincente Calderon for his whole playing career to date, having initially spent three years with the capital club’s ‘B’ or youth team between 2008 and 2011 learning his trade.

However, Koke made such a favourable impression on the then Atletico boss Javier Aguirre that he decided to promote the goalscoring midfield player into the first team at the start of the 2009-10 campaign, with the team struggling for form at the time.

Koke, who went on to net nine goals in total is 83 league outings for Atletico’s ‘B’ team, made his Liga debut for Los Rojiblancos as a second-half substitute against Spanish giants FC Barcelona at Camp Nou on Sept 19 2009 in a 5-2 loss to the Catalans.

But it took the midfield player until February 2011 to score his first league goal for Atletico, which came with a header against Sevilla under the management of Quique Flores, although it has needed the recent arrival of Diego Simeone as coach of the club to really ignite Koke’s career in the Spanish capital.

The former Atletico skipper returned to manage the club last December, with the team’s form immediately taking a turn for the better, as did that of several players under the watchful gaze of the inspirational Argentinian, with Koke being one such example.

So much so that in the previous campaign, the Spaniard enjoyed his best-ever season at the Calderon, with Koke managing to net three goals in total in his 48 appearances for the club in all competitions, all of which came in his 33 Liga outings.

Meanwhile, since the start of the 2013-14 campaign, Koke has already netted twice in his eight Liga games, goalscoring form that has evidently now caught the eye of Liverpool.

As a result, it is believed that the Reds are preparing a big-money offer for the player in January to test Atletico’s resolve to keep hold of Koke, whose current contract in the capital runs until June 30 2018.