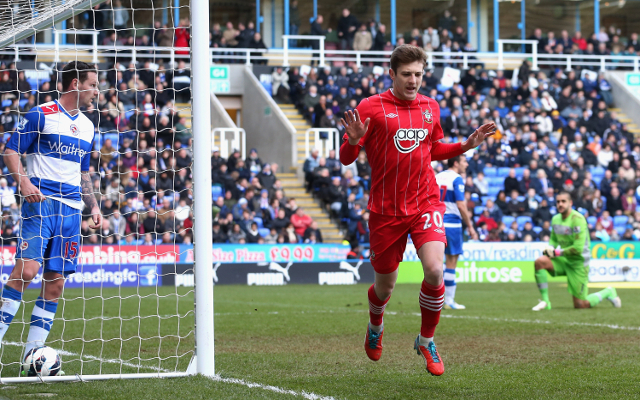 Saints skipper now wants to appear for the Three Lions too.

Southampton midfield player Adam Lallana says that he has taken inspiration from club-mate Rickie Lambert’s recent call-up to the national team, according to reports on SkySports.com.

The 25-year-old, who scored for the Saints in their 2-0 win over Swansea City at St Mary’s in the Premier League on Sunday afternoon, claims that Lambert’s surprise recent debut for the Three Lions has now given him and his Southampton team-mates renewed hope of also one day appearing for their country.

Striker Lambert received his first call-up to the England team for August’s friendly international against arch-rivals Scotland at Wembley Stadium, with the Saints front man scoring the winning goal with his first touch after coming on as a substitute to give the home side a 3-2 win.

As a result, Lambert then kept his place in Hodgson’s squad for last month’s World Cup qualifiers against Moldova at Wembley, followed by the crucial trip to take on group rivals Ukraine in Kiev, with the forward netting yet again in the first of those two ties.

“What’s happened to Rickie is an inspiration,” said Lallana. “Of course, it is the same for me, Jack Cork, Nathaniel Clyne and Luke Shaw in the future.

“It’s great and we’re all delighted for Rickie and how well he is doing. I wish him all the best.

“He’s got a couple of big internationals and hopefully they can get six points out of it.”

Lallana has been with the south-coast club for his whole career, with the 25-year-old making his Saints debut in August 2006.

And in the intervening seven-year period, the former England Under-21 international has appeared in 230 matches in total for Southampton in all competitions, scoring 51 goals in the process, including 40 strikes in 204 Premier League outings for the club.