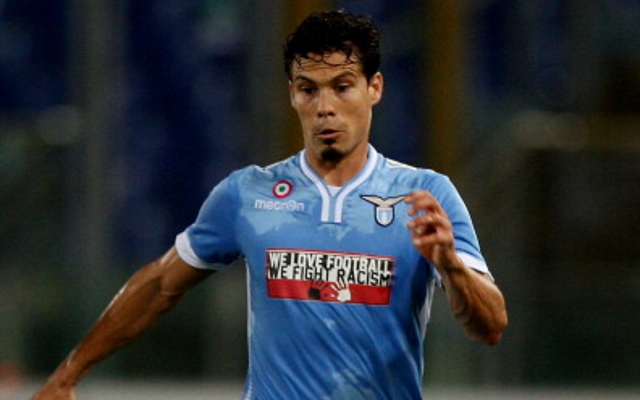 Check in to Atalanta vs Lazio

Lazio midfielder Anderson Hernanes has admitted that he is in no rush to agree to fresh terms with the capital outfit, Football-Italia.net reports.

The 28-year-old has been one of the club’s most valuable assets since arriving at the club in 2010 and was linked with moves to likes of Tottenham Hotspur, Manchester City and Paris Saint Germain over the summer but ended up staying with the Biancocelesti.

However, despite his decision to stay put over the summer, he has now insisted that he is in no rush to put pen-to-paper on a new deal to keep him at the club when his current deal expires in 2015.

He is likely to be included in Brazil’s party for next summer’s World Cup in his homeland and he has insisted that for the time being his sole focus is on making the Selecao XI and having a good tournament.

“I’m happy and satisfied at Lazio, but I’m firstly thinking about the World Cup,” the former Sao Paolo man noted.

“That is what is in my head right now, then we’ll see about a contract extension.”

So far this season Hernanes has notched two goals in six appearances for Lazio.

Barcelona chief in Italy to run rule over signing of Juventus star Paul Pogba May 21 2015, 6:42
Juventus

Top 10 best young defenders in Europe: Man United star is the best according to study May 5 2015, 22:39
Manchester United FC

Pirlo to Chelsea & six more veterans we’d love to see in the Premier League before they retire May 4 2015, 16:20
Chelsea FC