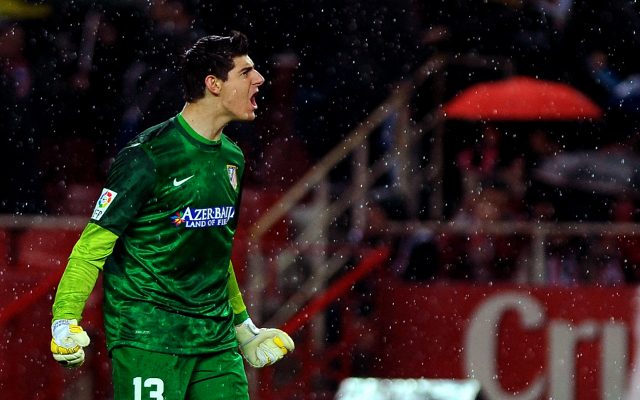 Talented youngster in the frame to replace departing Valdes.

Barcelona president Sandro Rosell has confirmed the club’s interest in young Chelsea goalkeeper Thibaut Courtois, according to the Metro.

The Belgian shot-stopper has really caught the eye in La Liga, as he has been loaned out by Chelsea to Atletico Madrid for the last three seasons, becoming a key player for Diego Simeone’s side.

With Petr Cech still the undisputed number one at Stamford Bridge, Courtois’ future has unsurprisingly come under some speculation in recent times, as he may be unable to dislodge the experienced Czech Republic international at Chelsea anytime soon.

Barcelona are on the lookout for a new goalkeeper for next season, as they face the departure of the long-serving Victor Valdes from the Nou Camp, with the Spaniard keen to try a new challenge after spending his entire career so far with Barcelona.

Barca have also been linked with a move for Liverpool’s Pepe Reina, though Rosell has now made a strong hint that it could be Courtois who becomes their main target next summer when they seek a replacement for Valdes.

“He is a great goalkeeper, he is very good and I like him a lot,” Rosell is quoted as saying.

Courtois himself has also said he would be interested in joining Barcelona, as he has enjoyed his time in Spain, making a move look increasingly likely next season.