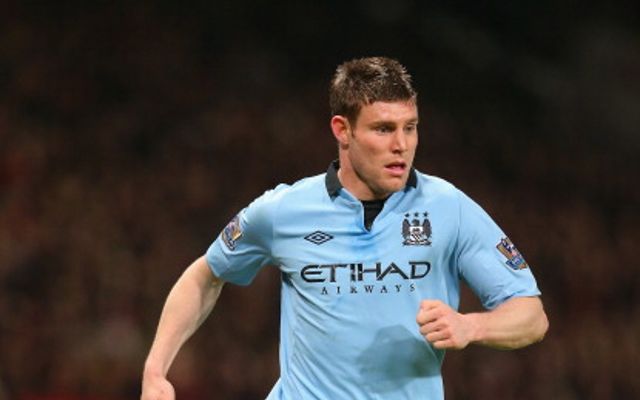 Man City wide man insists Hodgson and Co will do everything they can to be at the competition next summer.

England midfield player James Milner says that he and his fellow countrymen cannot bear the prospect of not playing in a World Cup in Brazil ahead of the Three Lions’ crucial upcoming qualifying double header for the global show-piece event in South America next summer, according to reports in the Guardian.

The Manchester City wide man was chosen by national team head coach Roy Hodgson as part of his 23-man squad that will take on Montenegro on Friday and then Poland a week on Tuesday, with both matches taking place at Wembley Stadium.

And as things stand at present, England lead Group H by just a single point from both second-placed Ukraine and third-in-the-table Montenegro going into their final two qualifiers, and therefore they know that victory in both of those fixtures will see Hodgson’s side qualify automatically for the tournament next June and July.

However, failure to take maximum points from either of those two ties and England face the daunting prospect of needing to win a two-legged playoff to ensure their safe passage on the road to Rio next year.

But Milner is adamant that he and his fellow Three Lions team-mates have absolutely no intention whatsoever of missing out on the once-in-a-lifetime opportunity of taking part in a World Cup being staged in Brazil.

“It’s in the back of my mind, of course, but it’s not something that I think of constantly because you always want to play well for your club and if you do it consistently you are giving yourself the best chance of playing for your country. Obviously I hope I’ll be part of the squad that travels to Brazil,” Milner said.

“I’ve been lucky enough to play in a European Championship and a World Cup before so it would be great to add another major tournament to that list. Playing against Brazil last summer you could see what a great tournament it will be by the atmosphere we sampled during that game [a 2-2 draw at the Maracanã]. The Brazilian people eat, breathe and sleep football and we saw that for ourselves last summer. So it’s a World Cup that no one wants to miss.”