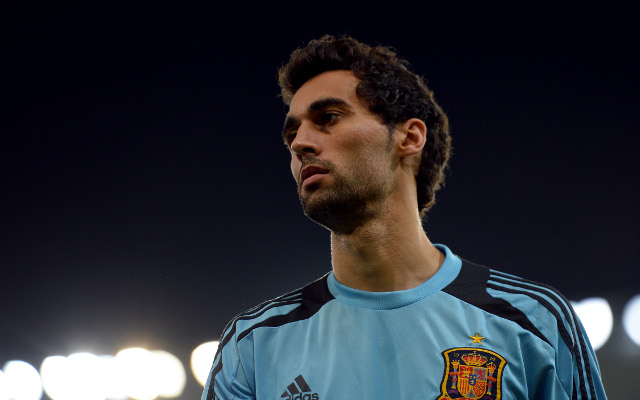 Rodgers wants more quality and experience on the left-hand side of his defence.

Liverpool are planning on bringing versatile defender Alvaro Arbeloa back to the club as the Spaniard has grown out of favour at Real Madrid, CaughtOffside understands.

The experienced full-back left the Merseyside giants to move to the Santiago Bernabeu in July 2009 for a fee of just £5m, with Arbeloa agreeing a five-year deal with los Blancos at the time.

And in the intervening four-year period, the Spain international has gone on to establish himself as being one of the most dependable and consistent full-backs currently plying their trade in La Liga, with Arbeloa having featured in 166 matches in total for Madrid in all competitions in that time, scoring three goals in the process, two of which came in his 113 league outings for the Spanish giants.

However, following the recent arrival of new head coach Carlo Ancelotti in the Spanish capital earlier this summer to replace previous manager Jose Mourinho, Arbeloa’s form and confidence have fallen away badly, so much so that the home faithful have even started to heavily criticise the 30-year-old’s displays at the back of late.

As a result, Ancelotti has now made the acquisition of a new right back one of the club’s top priorities for when the transfer window does open again in the new year, with Arbeloa’s days at Madrid seemingly numbered, despite the Spaniard having a contract that runs until 2016.

But the defender’s fall from favour at Real has also now opened the door to a possible return to Liverpool, either at the turn of the year if Ancelotti is successful in his pursuit of a replacement full back for Arbelola in January, or more likely at the end of this season.

The utility defender, who can operate on both the left and the right side of the back four, as he did on numerous occasions during his three-year stay on Merseyside, was a hugely popular player during his time on Merseyside after previous coach Rafa Benitez had brought him to the Reds from Liga outfit Deportivo La Coruna in January 2007.

Arbeloa made 98 appearances in total for Liverpool in all competitions during his two-and-a-half campaigns at the club, scoring two goals along the way, both of which came in his 66 Premier League outings at Anfield.

However, it was the big-money arrival of England international Glen Johnson on Merseyside in the summer of 2009 to play in Arbeloa’s right-back position that convinced the Spaniard to seek a new challenge in his career elsewhere.

And it is understood that Liverpool boss Brendan Rodgers is still not happy with either of his two current left backs at Anfield, which is why the Northern Irishman has been on the look-out of late for a new left-sided full back to bring to the club.

At present, Spaniard Jose Enrique is the club’s first-choice left-back, however, it is said that Rodgers does not have confidence in Enrique when it comes to the creative side to the defender’s game, despite his obvious willing in that department.

And that is why Rodgers spent much of the recent summer transfer window scoring the market for another left-back to provide Enrique with some some much-needed competition for his first-team place at the club.

Initially, the Reds head coach earmarked Chelsea’s reserve left-back Ryan Bertrand for the role, only for the west London club to refuse the Northern Irishman permission to speak with the England international.

That led to Rodgers then making a move for Tottenham Hotspur’s left-sided full-back Danny Rose, only for the Liverpool manager to once again be knocked back in his efforts to land the Englishman, before he finally decided to sign Valencia’s Aly Cissokho instead.

However, it is understood that Rodgers is not happy with either Enrique or the Frenchman and will now attempt to lure Arbeloa back to Anfield with the promise of a bumper long-term deal and the guarantee of first-team football as the club’s new left back going forward.

And with Arbeloa having been recently informed by Ancelotti that he will soon be made surplus to requirements at the Bernabeu under the Italian, the prospect of one last long-term deal on similar terms to those which he is on at present at Real may prove too hard to resist for the player.

But with this current season set to end with the 2014 World Cup finals in Brazil, it is thought more likely that the La Roja right back will actually now remain in the Spanish capital until the conclusion of this campaign, before then deciding to re-join the Merseysiders, rather than potentially lose his first-team place with the reigning world and European champions by moving to Anfield at the turn of the year.