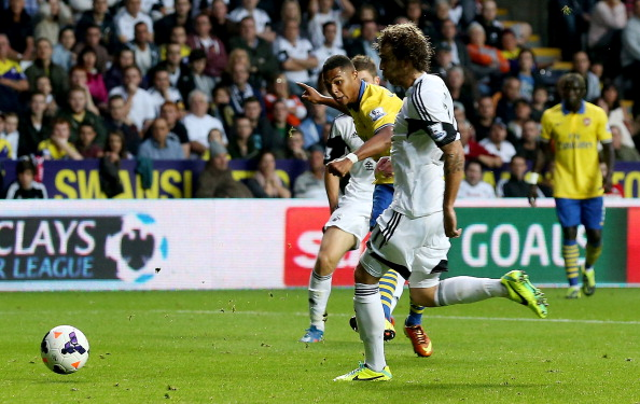 Check in to Hamburger SV vs VFB Stuttgart

Bundesliga side Stuttgart are keeping an eye on the progress of Serge Gnabry at Arsenal, and may look to re-sign their former player if he fails to break into the Gunners’ first-team on a regular basis, according to ESPN.

The 18-year-old started his career at Stuttgart before being snapped up by Arsenal in 2011, and he is rated as one of the best young players currently coming through at the Emirates Stadium.

However, despite some recent appearances in Arsene Wenger’s starting lineup, which included a well-taken goal in the recent 2-1 win at Swansea, Gnabry looks to have something of a fight on his hands to become a regular for the side, with some fierce competition ahead of him in the Arsenal squad.

This has led Stuttgart to offer him the option of returning to Germany if he chooses to do so, as he is still highly regarded by his old team.

Stuttgart sporting director Jochen Schneider revealed that they approached Gnabry about a return to the club during the summer, though the Germany Under-19 international chose to stay and fight for his place in the north London side.

“It’s true, he had the chance to return in the summer,” Schneider said. “But he opted to fight for his chance at Arsenal and deserves every respect for this decision.

“After his goal in Swansea I sent his father a text to congratulate him,” he added. “We will continue to monitor his progress. But if he continues to go down the path he is currently going and becomes a starter for Arsenal, it will get difficult.”