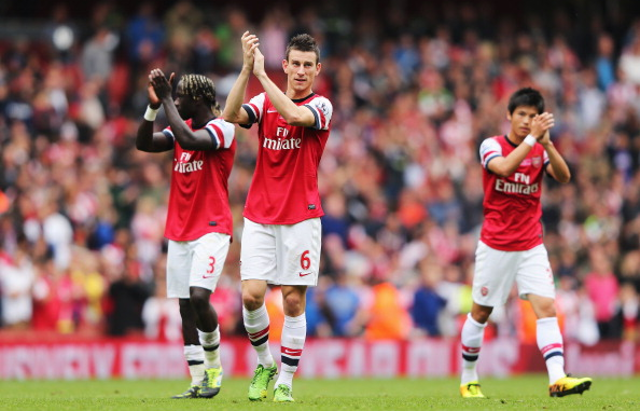 Serie A giants monitor Gunners pair to strengthen back four.

Juventus could be set to launch a sensational double raid on Arsenal for defensive pair Bacary Sagna and Laurent Koscielny, CaughtOffside understands.

The Italian giants are looking to strengthen defensively this January and have been linked with promising Red Bull Salzburg defender Martin Hinteregger, also a target for Liverpool and Manchester United, though they may now move for Koscielny as their answer in that position.

Juve manager Antonio Conte has several good options in central defence at the moment, though with the Serie A champions playing three at the back, their coach is keen to recruit at least one more player in that position, particularly with Martin Caceres currently out of favour and possibly heading for the exit door this January.

Koscielny has previously attracted attention from both Bayern Munich and Barcelona after becoming a highly impressive performer for Arsenal down the years, and at 28 years of age, Arsene Wenger may feel tempted to cash in on the player while he can, as he targets a move for up-and-coming centre-back Kurt Zouma.

Still, with Juventus also tracking Sagna, Arsenal are likely to be keen to avoid a situation that would see two experienced members of their backline leave the club in quick succession.

Given Sagna’s current contract situation at Arsenal, he may be the more realistic target for the Italians, as he will be available on a free at the end of the season if he fails to agree to an extension to his current deal at the Emirates Stadium.

The French international full-back has been with the Gunners since 2007 and has been a solid and reliable performer for the club in that time, though he has reportedly stalled on signing a new deal due to worries over the club’s recent lack of silverware.

Juventus, on the other hand, have been tremendously successful in recent seasons, winning two Serie A titles in a row under their charismatic young manager Conte, who is determined to improve his squad and turn them into genuine Champions League contenders.

While Conte may make a bid for Koscielny this January, he is more likely to wait until the summer to sign Sagna on a free, though Juventus may take some steps in agreeing a pre-contract deal with the 30-year-old, who they see as an upgrade on current right-back Stephan Lichtsteiner.

Sagna is also wanted by Ligue 1 giants PSG and Monaco, who are both monitoring his uncertain situation at Arsenal, and the former Auxerre man won’t be short of options if he does decide to leave Arsenal next summer.