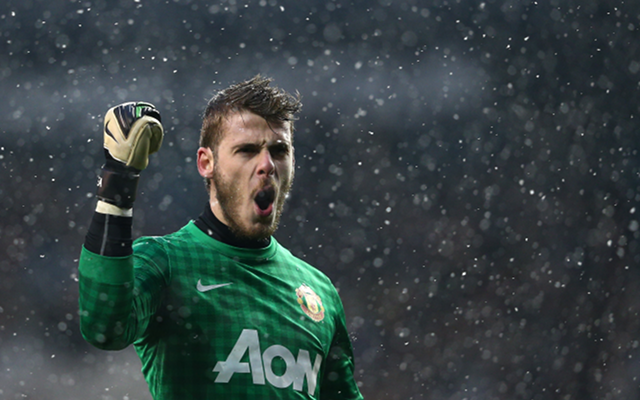 Super-agent Mendes flying in for talks in the north west next week.

Manchester United goalkeeper David de Gea will put pen to paper on a new deal at Old Trafford next week, according to reports in the Sun.

The highly rated former Spain Under-23 international has been with the Premier League champions for the past three seasons now, with De Gea having originally arrived at the ‘Theatre of Dreams’ from Liga giants Atletico de Madrid in June 2011 on a five-year deal for a fee of £17.8 million.

And in the intervening two-year period, De Gea has slowly begun to justify that heft transfer fee with a string of impressive displays between the sticks for the Red Devils, so much so that the club’s hierarchy are now understood to be preparing the shot stopper a contract extension to keep the Spaniard in the north west beyond the end of his current deal that expires on June 30 2016.

As a result, De Gea’s agent, Jorge Mendes, is set to fly in for talks with the Premier League giants next week and to finalise the terms on the proposed new bumper £75,000-per-week contract.

In total De Gea, 22, has managed to appear in 91 matches in all competitions for United since the start of he 2011-12 campaign, including 64 in the Premier League, winning one Premier League title in the process last time out.