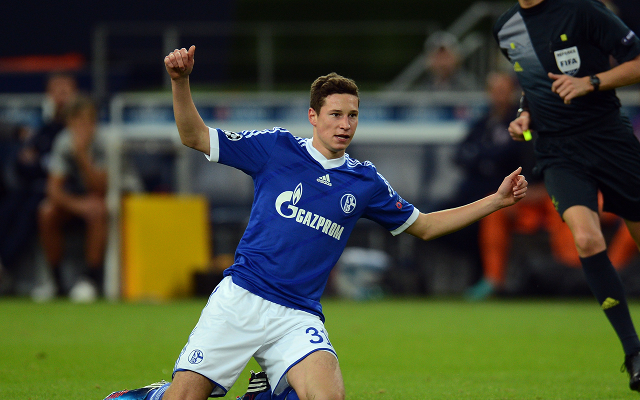 German starlet confesses he hopes to land a move to England in the future.

Young Schalke ace Julian Draxler has admitted that he one day hopes to play for some of Europe’s biggest clubs and in doing so has perhaps dropped the biggest hint yet that he will make his way over to the Premier League sooner rather than later, the Daily Star reports.

The 20-year-old made a serious impression on the football world last season by bagging 13 goals in 39 appearances and has been strongly linked with a move to the Premier League since the summer transfer window.

Chelsea boss Jose Mourinho was reportedly having him watched, whilst Arsenal manager Arsene Wenger is known to be a big fan of the German international and had hoped to be able to open a dialogue with Schalke over a possible deal.

And both the Blues and the Gunners were undeterred by The 19-year-old attacking midfielder signing a new deal at Bundesliga side, tying him to the club until 2018.

And now the dynamic attacking midfielder has alerted a host of top clubs by announcing that he does in fact intend to play elsewhere in the future.

“I owe Schalke a lot, but my roots here are not so deep that I would not be able to leave,” Draxler told Kolner Stadt-Anzeiger.

“I’m telling you honestly that my dream is to play for one of the big clubs at some point.

“If you want to achieve the big goals, which every world class player has, you have to play at the biggest clubs.

“These are Real, Barca, [Manchester] United, Arsenal and Chelsea.”