Liverpool manager Brendan Rodgers is hoping to pull off a double raid on Barcelona for two of their rising stars, with Martin Montoya and Sergi Roberto high on his list of transfer priorities, CaughtOffside understands.

Both players are just on the fringes of the Barcelona first-team at the moment, and face some high-class competition for places at the Nou Camp, leading to speculation that they may be allowed to leave in the near future.

Montoya has long been linked with the Reds, and although it was initially thought that they would wait and try their luck to snap him up on a free transfer next summer when his current contract with the Catalan giants expires, the club could submit a bid for him as soon as this January.

Rodgers has had to deal with some injury problems to Glen Johnson this season and is concerned about a lack of backup in his position at the club, and is keen to bring in Montoya to challenge the England international for a starting spot. 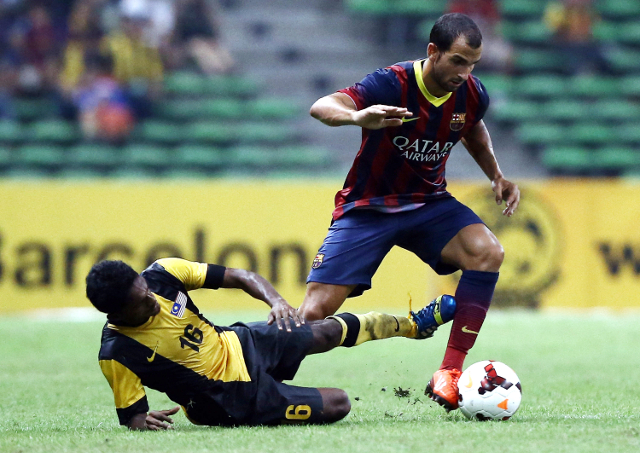 However, the 22-year-old will likely have a host of other clubs to choose from, with the likes of Arsenal and Inter Milan also believed to be tracking him, and could be tempted to wait until next season to fully assess all his options.

Roberto is in a similar situation, and although he is considered a fine young prospect at Barca, he may have to move on to further his career and achieve his potential, with the likes of Manchester United and Tottenham also monitoring his situation as he seems unlikely to sign a new contract with the La Liga champions.

A creative midfield player in the mould of the likes of Xavi and Cesc Fabregas, Roberto’s style of play could see him fit in perfectly at Liverpool, who play a highly technical and attack-minded game under Rodgers’ management.

And with the Anfield side lacking a true playmaker in that position since their sale of Xabi Alonso in 2009, they have been linked with a whole host of names in that position, including the likes of Javier Pastore and Ivan Rakitic, as well as Henrikh Mkhitaryan and Christian Eriksen during the summer before they eventually moved to Borussia Dortmund and Tottenham, respectively.

Roberto could be a cheaper option for the Reds, and Rodgers is hoping to be able to sign the pair for around £10m this January, in what would represent tremendous business for the Merseyside giants.

Having spent big over the summer, Liverpool are keen to continue bringing players in when the transfer window re-opens, and Rodgers is also determined to build his side around promising young players, seeing Montoya and Roberto as perfect long-term candidates to improve his team and help them climb the table.