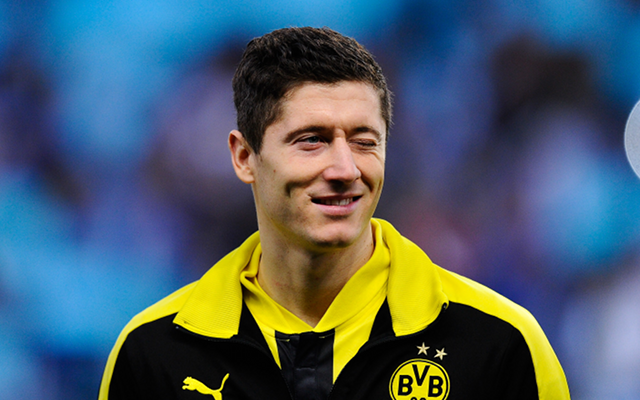 Borussia Dortmund striker Robert Lewandowski has admitted that there is no agreement in place with current champions Bayern Munich that will see him join them next summer, and has confessed that he is a big fan of the Premier League, Sky Sports reports.

His current deal with Dortmund is set to expire at the end of the season and he will be free to sign a pre-contract agreement with another club from January, and it is possible that Die Schwarzgelben will look to offload him during the winter window rather than see him walk away for nothing in the summer.

Speculation has grown claiming that he already has a gentleman’s agreement in place with Bayern and will follow Mario Gotze to the Alianz Arena, after both sides expressed a willingness to work together.

However, Lewandowski has been quick to distance himself from those rumours by insisting that no such deal is in place and admits he would like to play in England at some stage – with Manchester rivals United and City having courted his services in the recent past.

“It was a misunderstanding. It is true I had the opportunity to speak with Sir Alex Ferguson (last year), but we didn’t mention the transfer.

“One day I would like to play in the Premier League. It would be a great experience.”

Lewandowski came close to joining Blackburn Rovers in 2010, but Sam Allardyce missed out on his signature as Dortmund stole in to lure him away from Lech Poznan.

“There was a proposal from Blackburn,” he added.

“I even spoke with the former manager. In the end, I decided that Dortmund gave me a better chance of development as a footballer.”

However, for the time being Lewandowski is remaining focussed on his job at Dortmund, but first there is the small matter of taking on England in a World Cup qualifier on Tuesday.

“We know all about this England team and the whole team is very dangerous. As always, we have to watch out for Wayne Rooney. It’s not only the task for defenders, but for the whole team, and it will be a very hard match.

“We won’t be favourites and we don’t stand a chance of going through, but we want to go to Wembley and allow our supporters a little fun.

“I don’t know why we have good players at top clubs but we don’t have a team who can play ruthless football and kill teams off. In qualification, victories and points are the most important things, not the style of play.”