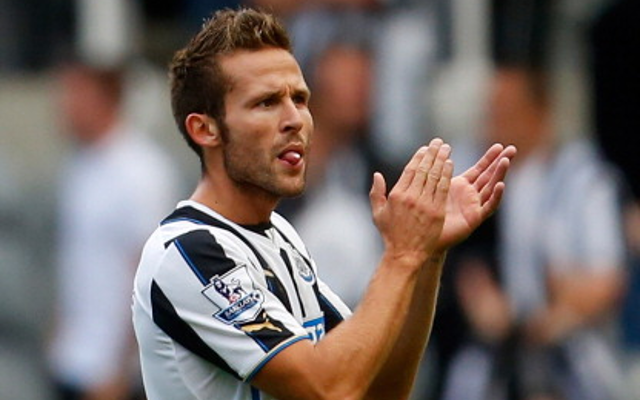 Newcastle United manager Alan Pardew has admitted that he faced a potentially difficult situation with Yohan Cabaye’s interest in a move to Arsenal this summer, but is delighted to have been able to keep hold of him, Sky Sports reports.

Cabaye made it clear to Pardew that he wanted to make the move to north London during the previous transfer window after a £10m bid from Arsenal had turned his head.

However, Newcastle stood their ground and refused to sanction the move and managed to keep hold of their prized asset.

The French international has since accepted the club’s stance and apologised to the fans before getting on with re-establishing himself within the first team, and Pardew is of the opinion that a disruptive saga has been quickly forgotten by all concerned.

“That was a difficult situation because I’ve got a great relationship with Yohan,” Pardew said.

“When a player comes in and is trying to force a move, which really and truly he was trying to do – which happens at other clubs, we’re not the only club that’s happened to – then it’s difficult and we had some words.

“I told him my opinion but the most important thing when you get through that process is coming out the other side that you’re still intact. Fortunately, me and Yohan have come through that intact, and that’s important.”

Pardew added: “(It’s fortunate) Yohan stayed because I do feel that he’s an important player for us. He’s such a talent in terms of being a technician on the ball.

“He’s just got such great quality. He’s as good a midfield player as I’ve worked with and when you consider I’ve had Michael Carrick amongst many, I’d put him in that level.

“He’s a player ingrained in the French side and will be a big part of the French team that goes to the World Cup, if they qualify.”

Cabaye impressed during France’s 6-0 victory over Australia on Friday, and coach Didier Deschamps has admitted it is great to see him back on the pitch once again.

“He got slightly lost during the summer period,” he said.

“But I am not just discovering that Yohan is a very good player with a lot of influence. He has always been important with his technical qualities. I am fortunate to have some very good players in that position.”