Reds want to beat the rest of Europe to deadly Colombia marksman.

Liverpool are planning on going head to head with Spanish giants Real Madrid in the race to win the signature of prolific FC Porto front man Jackson Martinez at the end of the season, and los Blancos’ own much-publicised pursuit of Reds striker Luis Suarez could ultimately play into the Premier League side’s hands.

The Merseyside giants are already starting to plan for life without their controversial Uruguay forward, despite the seemingly successful comeback into the first team that Suarez recently made following the conclusion of the player’s ten-match ban handed down to him by The Football Association for biting Chelsea defender Branislav Ivanovic on the arm in a Premier League match at Anfield last April.

Suarez’s current contract with Liverpool now runs until June 30 2018 after the 26-year-old put pen to paper on a new bumper long-term deal with the club last August, however, all the signs coming out of Anfield of late are pointing to the fact that the attacker has no intention whatsoever of agreeing to extend his stay on Merseyside.

In fact, should head coach Brendan Rodgers fail to manage to steer the Reds into the top four of the Premier League standings come the end of this season, and with it a place in the 2014/15 Uefa Champions League, then there is little doubt amongst the club’s hierarchy that Suarez will once again push for a move to a big-name European club competing in Europe’s premier club competition next summer. 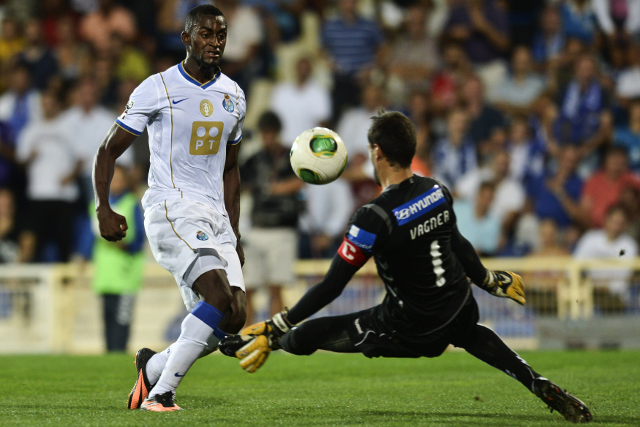 And with Suarez known to favour a lucrative move to the Santiago Bernabeu next year, the Reds bosses are said to be hopeful that if the worst-case scenario does indeed pan out and their star man decides to again agitate for a transfer away from Anfield, then Madrid will in turn drop their own reported interest in Porto’s in-form marksman, who Liverpool have been closely monitoring for some time now.

Rodgers and his ever-expanding network of scouts throughout the world  have been busy drawing up a short list of potential striking targets of late that Liverpool could possibly make a move for, either when the winter transfer window does finally open again for business for the year in January, or more likely at the end of this campaign.

The Northern Irishman would like to bring another world-class front man to Anfield next summer, even if Suarez does decide to actually remain with the club, as the Reds boss attempted to do in July when he lodged a bid of £22 million with Atletico de Madrid for their Brazil-born forward Diego Costa.

And even though Costa and Atleti both rejected the Merseysiders’ advances, that has still not deterred Rodgers from since switching his striking focus elsewhere towards new targets, with his scouting network having now strongly advised the Irishman to go all out to land Porto’s coveted Colombia international.

Martinez is currently one of the most sough-after and in-demand marksmen plying their trade on the Continent after what has been a sensational last season and a bit with the Portuguese champions.

The 27-year-old only arrived at the Dragao from Mexican outfit Jaguares de Chiapas in July 2012 for a fee of just $11m on a four-year deal, and it is fair to say that in the intervening 15-month period, Martinez has gone on to prove himself to be one of the most consistent and prolific strikers currently operating in European football.

In his debut campaign with the Portuguese giants last time out, Martinez managed to hit the back of the net on an eye-catching 34 occasions in total in just 43 matches in all competitions for his new employers, including 26 strikes in only 30 league outings for the club.

And the forward has simply carried on in this campaign exactly where he left off at the end of last season by finding the back of the net on a regular basis for Porto, with Martinez having so far netted an equally impressive nine strikes in total in just 10 contests in all competitions, seven of which came in his seven league matches for the Portuguese to date.

As a result, it is understood that the Reds are now prepared to push the boat out financially in order to bring Martinez to Merseyside, with it known around Europe that his club will be willing to offload their prize asset come the end of this campaign to a suitor who meets their own valuation of their player.

Martinez has a contract with Porto that currently runs until June 30 2016, however, with his employers having already turned down two big-money offers for the attacker from the likes of both Serie A high-flyers Napoli and Premier League champions Manchester United during the recent summer transfer window, Liverpool know that they may have to break the bank with a bid upwards of £30m in order to convince Porto to do business.