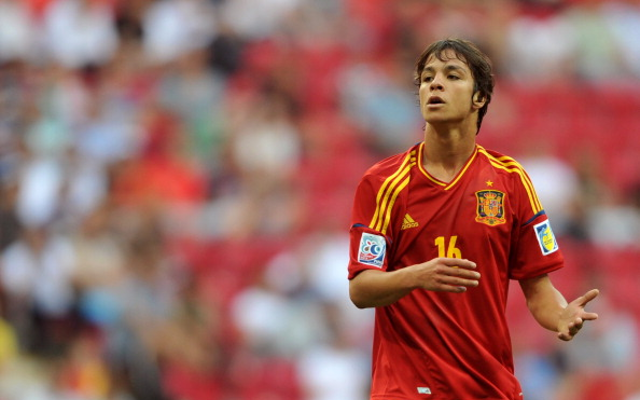 Check in to Espanyol vs Atletico Madrid

Bayern Munich are the latest side to be linked with a move for highly-rated Atletico Madrid youngster Oliver Torres, who is also a top target for manager Pep Guardiola’s old club Barcelona.

The likes of Chelsea and Manchester City have also been mentioned as admirers of the 18-year-old playmaker, though CaughtOffside now understands that Bayern are set to step up their interest in the exciting midfielder this January.

Rated as one of the bets up-and-coming prospects in Spanish football, Torres has drawn comparisons with Barcelona legend Xavi in his ability to dictate play from midfield, and this style of football would certainly fit into Guardiola’s philosophy at his new club.

The Spanish manager took over at the Allianz Arena this summer from Juup Heynckes, and inherited a highly impressive side that won the treble last season.

Guardiola has already brought in two midfield playmakers in Thiago Alcantara and Mario Goetze, though it is understood that he wants to bring in Torres to play a deeper role in the future, with a view to eventually replacing Bastian Schweinsteiger.

With that being the long-term plan, Torres could be loaned back to Atletico to continue his development under the management of Diego Simeone, whose own reputation as a manager is growing as he looks close to turning his side into genuine contenders for the La Liga title in Spain.

This arrangement would clearly appeal more to Atletico, as they will not want to see their prized asset move to a rival, and they would ideally like to keep hold of him a little longer as he matures and becomes more of a regular in the first-team.

With the Xavi comparisons, Barcelona have clearly identified Torres as the long-term successor to the veteran playmaker at the Nou Camp, and it would be a real blow to lose out to such a top talent to their previous manager.

It was thought that Barca would have first refusal on Torres after selling David Villa to Atletico during the summer, but Bayern will hope to be able to tempt him to Germany in the long run, as the Bavarian giants look potentially like dominating European football for the next few years.

In what could be a busy January at Atletico, the Spanish outfit also face losing another exciting midfield youngster in Koke, who is a target for Manchester United.

Leading scorer Diego Costa is also attracting a lot of interest, though the club may also be able to bring in some big-money signings, as they still have cash remaining from the £51m sale of Radamel Falcao to Monaco in the summer.