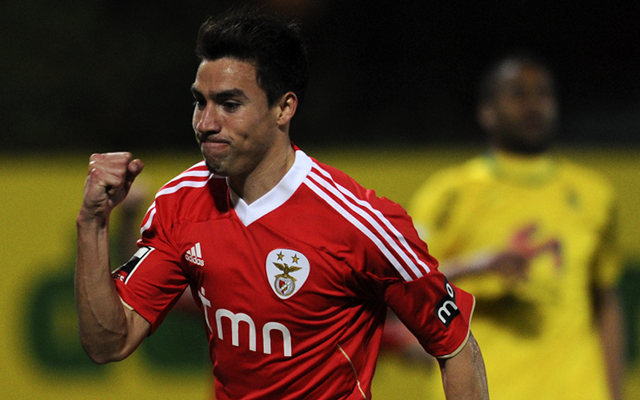 Tottenham manager Andre Villas-Boas is set to continue spending big on his squad this January as CaughtOffside understands he is prioritising a move for highly-rated Benfica star Nicolas Gaitain.

Spurs have been linked with a number of wingers ahead of the winter transfer window, with Blackpool starlet Tom Ince also believed to be high on Villas-Boas’ agenda.

However, it has now emerged that the ambitious north London side are ready to go all out and spend as much as £30m on the signing of Gaitan, who has also been linked as a target for Manchester United in the recent past.

It was thought that the Premier League champions could bring the Argentine international to Old Trafford during the summer, though manager David Moyes eventually opted to keep faith with his attacking options and offered a new contract to Portuguese attacker Nani.

With Gaitan still available, and widely regarded as being too good for the lower level of competition in the Portuguese league, a move to a top club could be on the cards this January, with the likes of Atletico Madrid and Monaco also said to be looking at him.

Gaitan started out his career in his native Argentina with Boca Juniors, and has impressed with Benfica, scoring 18 goals and providing 38 assists in the last three seasons.

This kind of form on the flanks could mean he is a highly useful addition to Spurs this season, with new summer signing Erik Lamela currently struggling to settle in to the demands of English football following his big-money arrival from Roma.

It is understood that Villas-Boas is slightly concerned by Lamela’s start to life at White Hart Lane, and is determined to bring in extra options in the wide areas to ensure there is not too much pressure on the 21-year-old to hit form immediately.

Spurs have title ambitions this season after their summer spending spree, and are happy to continue to bring in players to ensure they at least qualify for the Champions League, after narrowly missing out on fourth place to rivals Arsenal last term.

Benfica certainly won’t want to part with Gaitan cheaply, and it is expected that it could take a bid of £30m to sign him this January.

Last season’s Europa League finalists also face potential bids for another of their top talents this season, with Serbian playmaker Nemanja Matic said to be attracting strong interest from Liverpool.