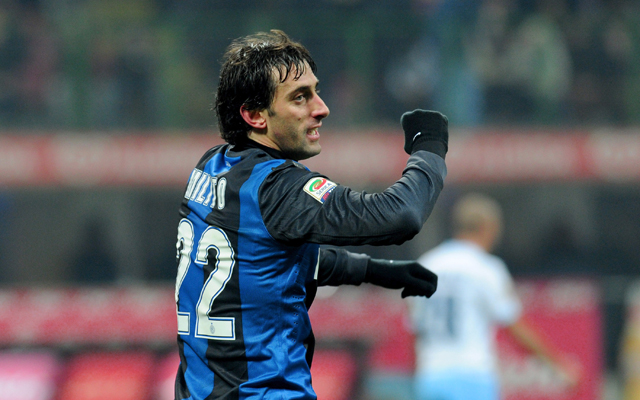 Inter Milan could be ready to listen to offers from Barcelona for veteran striker Diego Milito, according to Forza Italian Football.

The Italian giants are supposedly willing to cash in on the 34-year-old, whose form in recent seasons has been disrupted by injury, and who has emerged as something of a surprise target for La Liga champions Barcelona ahead of the January transfer window.

With manager Gerardo Martino reportedly keen on bringing in an out-and-out striker on a short-term deal, Barcelona have been linked with the likes of Miroslav Klose and David Trezeguet in recent weeks, and Milito could also be on their shortlist of surprise transfer targets for the middle of the season.

The Argentine had the stand-out season of his career in 2009/10 with 30 goals for Inter as they won the treble under Jose Mourinho, with two of those goals coming in their Champions League final win over Bayern Munich at the Bernabeu.

However, Milito has not quite managed to recapture that form since then, and with Inter plotting some big moves in the transfer market this January, they may be happy to allow him his move to the Nou Camp.

Southampton striker Pablo Osvaldo could be his replacement at the San Siro, with the former Roma star supposedly unhappy in the Premier League.