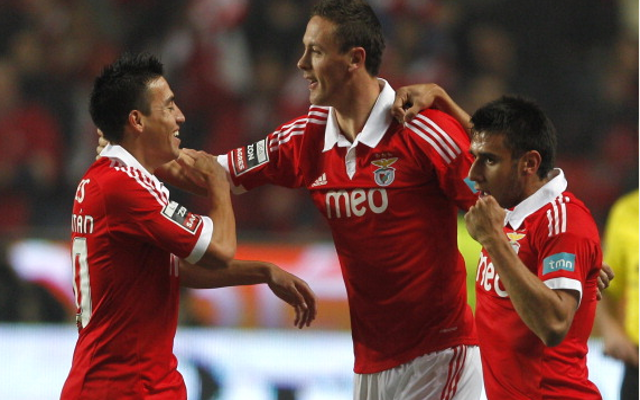 Twenty-five-year-old left the Bridge two years ago for the Portuguese capital.

Highly rated Benfica midfield player Nemanja Matic has confirmed that he would be keen to re-join Premier League giants Chelsea when the winter transfer window does open again for business for the year finally in January, according to reports in the Metro.

The in-demand Serbia international played for the west London club for two years between 2009 and 2011 after signing for the Blues from MFK Kosice on a four-year deal for a fee of just £1.5 million.

However, his two seasons spent at Stamford Bridge saw Matic make just the two Premier League appearances for Chelsea, with the 25-year-old then being sent out on loan in his second year to Eredivisie outfit Vitesse Arnhem, who the midfield player netted two goals for in his 27 league matches in Holland.

But, since leaving the Blues for Portuguese side Benfica in January 2011 as part of the £21m deal that also saw Brazil international David Luiz move in the opposite direction, Matic’s career has really taken off at the Stadium of Light, with the Serb having scored four times in the league for his new team in his 45 league contests.

And now the player, who has a contract in the Portuguese capital that runs until 2018, as well as a 45m euro buyout clause in that deal, says he would like to return to Chelsea one day.

“I would probably like to stay another year with Benfica, but if somebody like [Jose] Mourinho wanted to bring me back to London, it would be difficult to turn down,” said Matic.

“It would be a great chance to prove that I can play in the Premier League.”