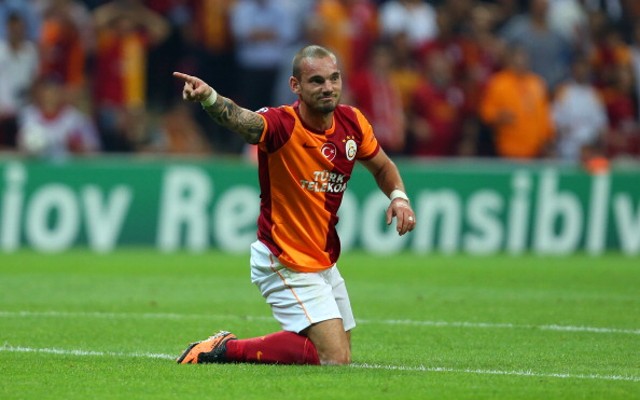 Galatasaray may reportedly use Dutch international midfielder as bait in their pursuit of Man United winger Nani according to the Daily Express.

Former Man City boss Roberto Mancini, now in charge of Istanbul giants Galatasaray, is readying a £13m bid for Portuguese international Nani who he sees as a long term replacement for Sneijder, who is also being pursued by Chelsea.

Galatasaray are willing to offer the former Ajax, Real Madrid and Inter Milan man to Man United, who failed with a summer move to sign the experienced 29 year old who could be seen by David Moyes as an ideal high profile capture who could add some much needed creativity to his brittle midfield.

Mancini is keen to conduct an overhaul of the squad he inherited from Fatih Terim but is at the limit of his allotted foreign player quota and as such may feel that using Sneijder to help land Nani as a means to an end.

However, if Sneijder fails to move, Galatasaray would need to offload at least one foreign player before adding Nani, given the Turkish Football Federation’s limit of 10 foreign players per squad.

26 year old attacker Nani had been playing something of a bit-part role at Old Trafford in recent seasons but David Moyes has attempted to use the winger more frequently this term with limited success.

Sneijder moved to Galatasaray in January and has scored five goals in 23 appearances, helping the club to a Super Lig title last term as well as having a hand in guiding Gala to the Champions League quarter-finals.